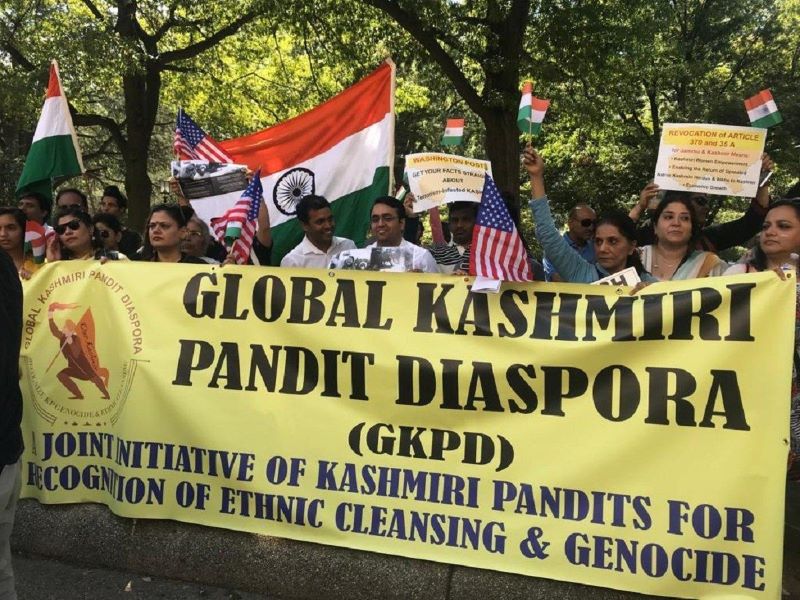 New Delhi, Sep 7 (IANS) An overseas Kashmiri Pandit body on Saturday held a protest outside the office of the Washington Post newspaper in the US capital over its “biased” and one-sided articles following the abrogation of Article 370 and 35A in Jammu and Kashmir.

The protest was held due to the “unbearable” series of articles in the Washington Post following the revocation of Article 370.

The protesters said Kashmiri Pandits are victims of genocide and ethnic cleansing and pointedly asked the newspaper: “Why Choose Jihadi news?” and challenged the Washington Post to “Hear our Voices. Tell our Stories”.

Mohan Sapru, Chief Coordinator of the rally said: “Washington Post’s biased reporting ignores the inconvenient truth that Article 370 and 35A have denied democratic rights to minorities, women and weaker sections of the society while throttling Kashmir’s economy.

“The Kashmir valley became a breeding ground for rampant corruption, separatism and Islamic terrorism that resulted in the worst form of human rights violation due to rape, murder and eventual ethnic cleansing of the native Kashmiri Pandits.

“Revocation of Article 370 and 35A enables addressing the menace of cross-border Islamic terrorism, empowerment of women, and restoration of justice to minorities and economic opportunities for all. We fully support and endorse revocation of these repressive articles.”

Vijay Sazawal, International Coordinator Indo American Kashmir Forum, said, “Western journalists, including the Washington Post, should be ashamed of their reporting on Kashmir. The Post by stating the changes introduced by the Indian Parliament on the reorganisation of Jammu and Kashmir as a ‘victory of Hinduism over Islam’ is disgraceful, disgusting, and disingenuous.”

Kamala Harris apologizes after ‘laughing’ at remark on Trump

B.K.S. Iyengar who took yoga to world is dead