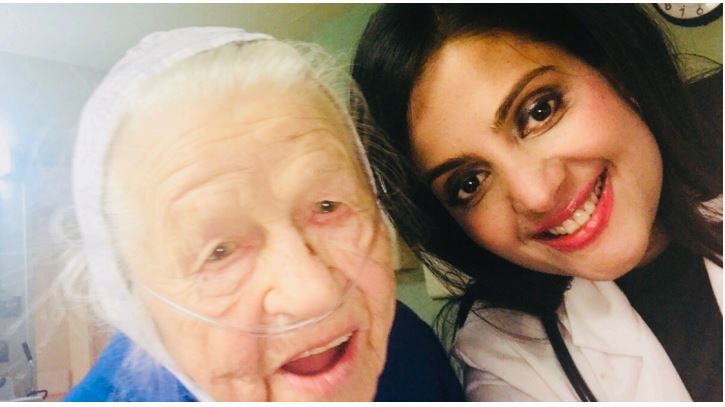 Until Dr. Vilasini Ganesh’s ordeal began in 2016, she was living the American dream. She had a thriving medical practice, patients who looked up to her, and a beautiful home that she shared with her family― until she was accused of committing healthcare fraud and the FBI raided her Campbell Medical Group practice in Saratoga, California.

In the months that followed, Ganesh was sentenced to over five years in prison after a federal grand jury convicted her of five counts of health care fraud and five counts of making false statements. She lost her thriving medical practice, her medical license, her home, savings, and peace of mind.

Throughout the trial and in closing, Ganesh claims, the prosecutors presented an extensive array of fraudulent evidence to the jury that did not prove any false claims submitted by her, but rather the claims of a completely different provider. Also, she was forced to go to trial with an attorney who provided no defense whatsoever, in violation of her constitutional rights.

“I was prosecuted like a slave,” Ganesh told NRI Pulse. “My family, children, and I have been put through severe psychological and emotional trauma. It feels like they have a knife to my throat and a gun to my head all the time. I’ve been waking up with nightmares for the past five years.”

The one-time family medicine and urgent care physician said “her life changed upside down” when she decided to fight insurance companies for non-payment of over $500,000 in patient care service claims dating back to 2012 for medical care provided to her patients.

“I reached out to the California Medical Association, and they gave me referrals to attorneys to reach out to. The attorneys suggested that I file a lawsuit against the insurance companies.”

She said the insurance companies retaliated with fraud complaints. The Northern California Department of Justice initiated a health care fraud case against her and secured an indictment soon after.

“The prosecutor who initiated the indictment against me was also an affiliate of a private law firm that exclusively represents private “for-profit” insurance companies. Hence, she immediately recused herself due to conflict of interest after initiating the indictment charges,” Ganesh said.

“The prosecutors presented over 40,000 patients records, billings, claims, and payments of an entirely different doctor’s office to the jury during the trial and in closing arguments as proof of my healthcare fraud crimes.”

“Normally these types of fraud cases are initiated by Medicare or Medicaid, but no government-or tax payer funded program was included in our case. The prosecutors came in. They threatened me, they threatened my staff. They pressured me to take a plea deal. I was terrified, but I told them I would rather die than plead guilty.  The insurance companies defrauded me. I did not defraud them.”

In August 2018, after an eight-week trial, Ganesh was sentenced to 63 months in prison for making false statements related to a health care benefits program after a federal grand jury indicted her. The jury convicted Ganesh of five counts of health care fraud and five counts of making false statements. The defendants were acquitted of the remaining counts.

During Ganesh’s sentencing hearing, the judge stated that Ganesh obstructed justice by misrepresenting her understanding of the legal system, the amount of money she was paid by insurers, and whether she understood that it was improper to “upcharge” when submitting claims to insurers.  The judge also found that Ganesh had abused a position of trust by submitting the false claims, according to a DOJ statement.

Ganesh and her legal counsel Lisa Rasmussen, who is executive director of ACLU, (American Civil Liberties Union) Nevada spoke to NRI Pulse recently over Zoom. Both insist that the charges were false and the jury was tricked into believing false, fabricated evidence.

“They did not find anything against us, so they fabricated evidence. They took thousands of patients’ records, claims from another doctor’s office and blamed it on us,” Ganesh said. “We did not realize this during the trial because they had redacted the tax ID and provider names. After the trial, one of the. attorneys discovered thousands of claims in the form of spreadsheets from another doctor’s office. They committed fraud over the jury.”

As part of evidence, checks purportedly written way back in 1988 were presented. “They sentenced me based on checks issued way back when I was a teenager in India. I wasn’t even in the US in 1988,” Ganesh said.

“Most importantly the prosecutors did not hire any medical billing experts for this entire case, Also, no audits by the government nor the insurance companies to show clear evidence of loss calculations.”

“Post-trial, Linda Rasmussen filed defense motions and proof of hard proof (CD-rom) of my patient database to show that evidence presented in trial to the jury was fraudulent.”

The defense attorney also retained several medical billing experts to show that the loss calculations were incorrect and that the insurance companies did not make payments to Ganesh.

Ganesh was acquitted of money laundering and conspiracy charges, but was convicted of 10 different charges that represent five different patient dates, Rasmussen said.

“I had said that this was a structural error and must be reversed and there should be an evidentiary hearing to determine if the government did this inadvertently or on purpose,” Rasmussen added. “But those claims were rejected by the ninth circuit appellate court.”

Ganesh said her trial attorney charged her over $100,000, but provided no defense whatsoever.

“In his opening arguments, he said, “I agree with the prosecutors” in front of the jury and threw me under the bus. He didn’t even have patients as witnesses. He did not show me what the government case was. He put up an insanity defense which made no sense.”

“I asked for a change of attorney twice before trial. But no inquiry was conducted. I was forced to go to trial with a bad lawyer. That’s a huge Sixth Amendment Rights violation.”

“When I tried to talk, they threatened to revoke my bail. I was very scared. I had to shut my mouth. I could have defended myself, but they did not allow me to do that,” Ganesh added.

Rasmussen sought bail pending appeal for Ganesh. Any day, Ganesh will get an order to surrender to begin her 63-month sentence.

The Ninth Circuit court has denied her appeal and affirmed the conviction. “We filed a petition for rehearing. That has been denied,” Rasmussen said. “I filed a motion to stay the mandate, to file a petition in the US Supreme Court which is the only other thing she can do.”

Ganesh told NRI Pulse her family is devastated by the developments. “I have young children whose mother will be taken away from them. My mother who lives in the Bay area has used up over 300K- her life’s savings- to help me with attorney’s legal fees. My brother is trying to help.”

Ganesh and her family are currently living in an apartment on a month-to-month lease.

Ganesh’s next step would be to get a lawyer to help with post-conviction claims, which she has to do from custody, Rasmussen said.  “The most sympathetic part of her claims is the Court’s repeated ongoing denial of the right to counsel of her choice which is such an important aspect of our criminal justice system. They are really good appellate claims. The ninth circuit appellate court’s denial of those claims is just inexplicable. They didn’t even follow their own case law and authority. She is yet to litigate the ineffective counsel claim which would be her next step. This is really messed up.”

Healthcare advocate and founder of Doctors of Courage, Linda Cheek MD, believes the Department of Justice has cookie-cutter methods that they use now against doctors, more and more of which are actually criminal in action, breaking the law in order to convict an innocent doctor.

“Even when as in Dr. Ganesh’s case, egregious false evidence is used to convict her, and when exposed, the court does nothing to correct the law-breaking or hold those who did it responsible. This gives the entire DOJ license to break the law to convict innocent people,” she told NRI Pulse via email.

“Techniques that the DOJ uses regularly, and are even being trained to use, are to modify records that are brought into trial. Changing names and dates on medical records, redacting exculpatory evidence on the chart, and altering audio recordings of visits are just some of the egregious actions. They also then force patients of the doctor to be witnesses and commit perjury or face charges of possession with intent to distribute and go to prison themselves if they don’t.”

“In all of the cases I have researched, I have yet to find a single one where these tactics have not been used to get a doctor to either plea, or be convicted in court.”

Cheek said these same tactics were used against her, “including the government calling in a prescription illegally in my name to add to my charges.  Every doctor that has contacted me about their case expresses their surprise at the illegal actions the DOJ has used against them. And yet none of this is exposed.”

“Anyone can be targeted, attacked, and destroyed based on false fabricated evidence,” she said.

*Veena Rao is the editor-in-chief of NRI Pulse and the author of Purple Lotus.