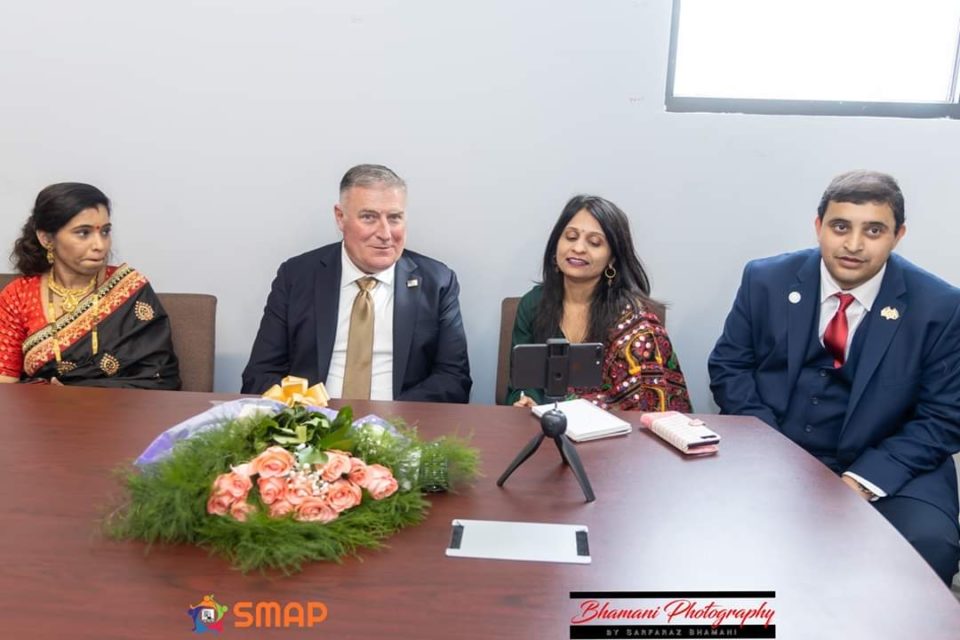 Atlanta, GA, April 2, 2020: “Indian-Americans are making our county and our state more competitive and vibrant, and I am very proud and happy that your community chose Georgia to settle down and raise families. It brightens my heart to see all these little children in this event and how you teach your children your values, your history, all those things that makes America a much better, vibrant community,” said Georgia State Insurance and Safety Fire Commissioner John King in an interview with NRI Pulse along sidelines of Chhatrapati Shivaji Maharaj Jayanti 2020, held at Gokuldham Haveli, organized by Shivaji Maharaj America Parivar (SMAP) foundation Inc, on March 1, 2020.

Kartik Bhatt, who currently serves as consumer member for the Georgia Board of Examiners facilitated the interview.

Governor Brian Kemp announced King’s appointment in mid-June and was sworn in on July 1, 2019, seven weeks after the elected official, Jim Beck, was accused of scheming to steal $2 million from his former employer, in part to fund his election campaign. King, a native of Mexico whom Kemp has called “an American hero,” created history as the first Hispanic constitutional officer in Georgia.

King, a longtime Doraville police chief, has extensive law enforcement and military experience. Through the National Guard, he’s deployed to combat in Bosnia-Herzegovina, Iraq and Afghanistan. Before joining the Doraville Police Department, he worked as an Atlanta police officer and detective. He has been Doraville’s chief since 2002. But he has no insurance background. So how did the appointment come about?

“I met the governor when I was interviewing to be the head of the national guard of military because I’m a serving officer in the military, with a lot of experience overseas and also the chief of police of Doraville. My best friend General Carden got the job and so I called the Governor and congratulated him because he made a great choice and months later, I received a text message from Gov. Kemp asking if I wanted to meet him. I didn’t really believe it,” said King. And during the meeting, King said Gov. Kemp explained the issue with the previous Commissioner and asked King if he was interested in getting the department back on track and the ethics back into the sector.

“Governor Kemp selected me for a reason,” said King. “He wanted someone completely outside of the industry to go inside the agency, look at everything and get it back on track. Since July I have been doing that. I have been traveling all over the state of GA and talking to business and communities, such as yours.  My job is to be the advocate for people. I have to ensure that we have good products that we provide to our citizens. It is important for me to not be tied to a desk. It is important for me to reach out and talk to the community and find out what is in your minds about what it is I can do in my area of Insurance and fire safety. The only way I’m going to be effective is by reaching out to communities and talking about how we can remove regulations that are getting in the way of business and how do we get the best product to our citizens.”

Commissioner King said he recognizes the significant role of the international community in the success of the state and success of the nation. “Being the chief of police in, Doraville since 2008, when our economy dropped significantly, especially in Doraville, the people and communities that saved Doraville were the Asian community and the Indian community. Your businesses, hard work, and the entrepreneurs that started business especially at that time, sustained the society. You do this every day – you are making our county, our state a competitive and more vibrant community and I am very proud and happy that your community chose Georgia to come and settle and raise families. It brightens my heart to see all these little children in this event and how you teach your children your values, your history, all those things that makes America a much better, vibrant community.”

Speaking about presiding over an event that celebrates an Indian hero, Chhatrapati Shivaji, King expressed his appreciation to the community in nurturing cultural values and passing it on to the future generations.  “I am fascinated at the fact that you have a hero and in how you transmit his values of being a representative of the people and how you transmit it to the next generation of children, to have them respect it.”

“I’m from Mexico. And I have served and lead in the military and law enforcement agencies. And now I have this incredible opportunity to have the government work for the people and that is what I’m focused on. This is what makes America a great nation,” concluded Commissioner King.