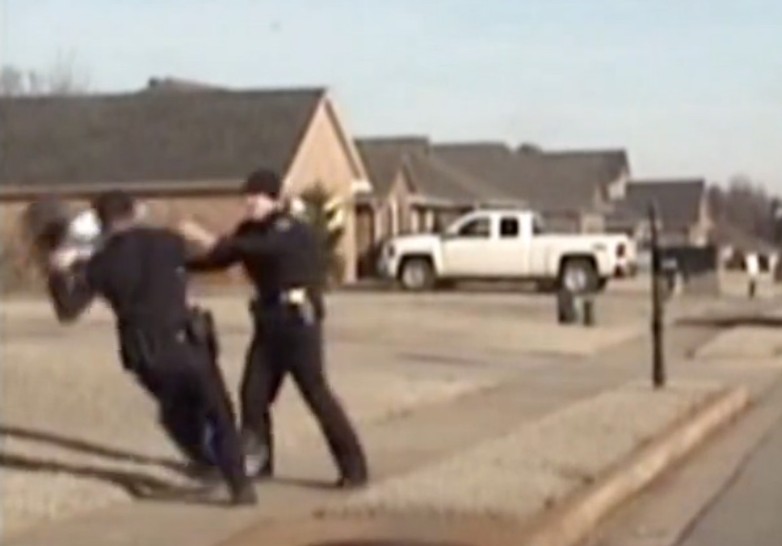 Washington, Feb 13: The FBI is investigating an incident in which an Indian grandfather’s encounter with police in Alabama left the man partially paralyzed, while one of the involved officers has been arrested.

Police officer Eric Parker  turned himself in to face assault charges. Chief Larry Muncey told a small press conference in Madison that he also recommended that Parker be fired for his use of force against a man who committed no crime, did not speak English and could not understand the commands.

Consul Anil Kumar sat with five members of the local Indian community in the front row, to watch the video from the patrol cars and listen to the non-emergency call that led to the violent confrontation, reports AI.com.

Muncey said “I found that Officer Eric Parker’s actions did not meet the high standards and expectations of the Madison City Police Department.”

Sureshbhai Patel, 57, had recently come from India to help care for his grandson, who was born prematurely and was suffering from health complications.

In the Feb 6 incident outside his son’s house Patel was tackled to the ground by the police. The police officer responsible for Patel’s injuries, field training officer Eric Parker, was served disciplinary action and was arrested for assault in the third degree, Madison Police Chief Larry Muncey told reporters Thursday.
After an investigation from the Office of Professional Standards Parker was “served with proposed disciplinary action according to the Madison City policy and procedures…I recommend termination,” he said. Parker turned himself into the authorities in Limestone County on Thursday, according to madisoncountyrecord.com.
The FBI is currently conducting a “parallel inquiry” to determine if any federal violations occurred, Muncey said. The Washington Post cited a spokesman for the FBI as saying that the agency became involved shortly after the Feb 6 incident and it is being treated as a civil rights investigation. The findings will be turned over to the Justice Department for review.
At a press conference Thursday, the Madison Police Department played the audio of the original 911 call to report the supposed suspicious activity and a dash-cam video of the incident, in which Patel was tackled to the ground with his hands held behind his back.
“For that, I sincerely apologize to Mr. Patel, his family and our community…our desire is to exceed everyone’s expectations,” Muncey said.
On Feb 6, a caller who lived in the Hardiman Place subdivision off of County Line Road placed a non-emergency 911 call to Madison Police, describing an individual walking around houses in the neighborhood and peering in garages, madisoncountyrecord.com reported.
The caller said the person had been exhibiting the same behavior on the previous day, Feb 5, and described Patel as a black guy, around 30-years-old, after being asked by the 911 operator.
It was then that Parker and his trainee, Andrew Slaughter, were dispatched to the scene. Officer Charles Spence arrived shortly thereafter in a separate car.
As Parker spoke to Patel, the dash-cam video showed, it became apparent that Patel spoke no English. Parker asked him for ID, where Patel lived and what his business was walking around the neighborhood.
Eventually, Patel’s hands were behind his back due to Parker holding his hands. At the critical point of the video, Parker slammed Patel to the ground, hitting head and torso first, unable to brace his fall, madisoncountyrecord.com said.
“He don’t speak a lick of English,” Parker said at least twice during the encounter after he tackled Patel.
As of Thursday morning, the Patel family attorney, Hank Sherrod out of Florence, said Sureshbhai could not grip with his hands but was able to slowly walk to the door and back to his bed after previously not having feeling at all in one of his legs.
Meanwhile, at the State Department spokesperson Jen Psaki said: “Our hearts go out to him (Patel) and to his family. Obviously, there’ll be an investigation into this case which will be handled by local authorities.”
“I don’t have anything more to lay out in terms of our diplomatic discussions,” she said when asked about reports of New Delhi expressing concern over the incident.
“I would say that the Secretary and the State Department certainly express our strong condolences to the family for everything that he has been through,” she said.
“This is being handled by local authorities, and certainly, we would address any concerns through private diplomatic channels,” Psaki added.