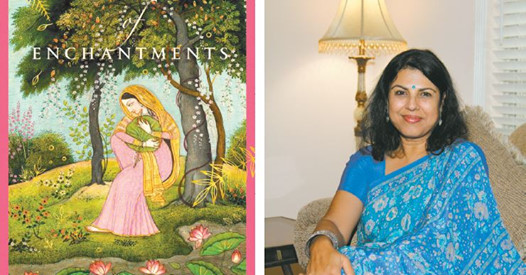 Author Chitra Banerjee Divakaruni talks to VEENA RAO about her new novel, ‘The Forest of Enchantments’.

Celebrated Indian-American author Chitra Banerjee Divakaruni’s new novel is a retelling of the epic Ramayana from Sita’s perspective. The Sita of The Forest of Enchantments is not the docile, long -suffering queen of public perception. She is a warrior princess, a woman of indomitable spirit and wisdom, a role model for the contemporary woman.

It is hard to remain unaffected by the sensitive, empathetic, lyrical voice of the protagonist who questions the difficult circumstances of her life, and her rights as a woman in a patriarchal world. These are questions that continue to remain relevant today.

While The Forest of Enchantments is the tragic love story of Sita and Ram, it is also the story of the other women of Ramayana –  Urmila, Kaushalya, Kaikeyi, Mandodari, Ahalya and Surpanakha, who, the author says in this Q&A, have been pushed to the edges even though they propel the epic forward.

Why did you choose to write about Sita, who is seen as a docile, long-suffering figure, at a time when the women’s empowerment movement is gaining strength around the world?
I have, for quite a while, had a sense, especially as I started to do research on the Ramayan, that Sita is not the docile, long suffering figure we have long been led to believe she is. Since she continues to be an icon of the perfect woman, I thought this was the right time to write a book where her strength and power is showcased.

We are introduced to a different Sita- a warrior princess, a healer, a woman who speaks her mind. “Why can’t customs change?”, she once asks her mother, while expressing her desire to rule Mithila. What were the challenges of molding a protagonist who is so different from the public perception of her?
I had to do a lot of research so that no one would discount the Sita of The Forest of Enchantments as my personal creation. I took small hints and mentions in the Ramayans of Valmiki, Krittibas and Kamban, as well as the Adbhuta Ramayan to sculpt the courageous warrior princess—admirable but very human—who is the heroine of my novel. Also, I did not change any of the major incidents that Sita goes through.

What is it like writing about mythological figures that are revered by millions? Does it add pressure to the writing? Does it affect your creativity and freedom as a writer? Were there fears at the back of your head of being challenged?
Oh yes, I felt tremendous pressure. This was the most important subject I’ve ever written about, even more important than Draupadi in The Palace of Illusions. (After all, Draupadi is not held up as the ideal of Indian womanhood—instead, she is treated as a cautionary figure!) It was so important for me to do a good job and present to the reading public a Sita who would inspire the present generations of women (and men as well, I hope) while breaking the patriarchal mould in which she had been imprisoned for so many years. I was afraid for a long time (this book took me 10 years to write!). Finally, I had to take a deep breath, put the fear aside and focus on the task at hand.

The Forest of Enchantments isn’t the story of Sita alone. It is the story of Urmila (who is referred to as the unsung heroine of Ramayan), and the other women of Ramayana- Kaushalya, Kaikeyi, Mandodari, Ahalya, Surpanakha. What do you want readers to learn from the diverse lives of these women?
All of these women in the Ramayan are such interesting, many-layered characters. And they have all been pushed to the edges even though they propel the action of the epic forward. Without Kaikeyi and Surpanakha, for instance, the Ramayan would have been a totally different story. There is something for us to learn from all of them in terms of women’s strength and women’s love/desire. Some of them are positive lessons, and some show us the tragic cost of certain actions. I just want readers to appreciate these women in all their complexity.

There are no villains in Chitra Banerjee Divakaruni’s version of Ramayan. Even the traditional villains of the story like Kaikeyi, Raavan and Surpanakha are portrayed as humans with good qualities and bad. Is it because the narrator is Sita, a woman, and women are intrinsically more empathetic?
That could be one reason. Sita is, after all, wise and compassionate, though she is also smart and doesn’t let anyone take advantage of her! But it’s also because I believe that humans aren’t black and white. All of us are a mix of the positive and the negative, and that’s what makes us unique and interesting.

Endure. That is what Sita’s mother advises her to learn when she gets married. Is that advice relevant in the modern-day world?
Endurance is a powerful quality. It keeps Sita from breaking down when she is in the direst of situations—imprisoned in Lanka, or banished to the forest while pregnant. But for Sita, endurance is only the 1st step. The second is to figure out what she needs to do in such a situation and focus her energies on it. For instance, when she gives birth in the forest to Lav and Kush, she puts all her energy into bringing them up as wonderful, evolved human beings. We must not forget this second step.

There are deep truths about love at the end of every chapter. These insights seem as relevant today as they were several centuries ago.
Thank you. I wanted to make The Forest of Enchantments a book that was also about Sita’s understanding of love in all its aspects. Different situations in her life and the lives of those around her make her experience or comprehend different kinds of love. I have heard from many readers that they have really appreciated this part of the novel!

The Forest of Enchantments talks about the futility of war. Is there a message there for our modern times?
Definitely. It is very interesting and significant to me that both our great epics, the Ramayan and the Mahabharat, depict horrific scenes of war and the destruction it brings about. I only wish humanity today could take this lesson to heart.

What kind of research did it take to write this book?
It took me several years of research. I read and thought deeply about major versions of the Ramayan, such as those by Valmiki, Krittibas, Kamban, Tulsidas, and a wonderful 16th century Bengali text by Chandravati as well as the Adbhuta Ramayan and folk songs and folk tales about Sita and the work of modern scholars. Several of these sources were quite different from the others, which also made me realize how diverse the tradition of the Ramayan is.

The Forests of Enchantments is a top 10 bestseller in India. Did it come as a surprise?
Yes! I was surprised and delighted. And it was the #1 bestseller at the Jaipur Literature Festival in 2019, which also was a great surprise. I am most appreciative of how readers have taken the book to their hearts. Many have written to me and said they love it even more than The Palace of Illusions. Many said it made them weep (which I take as a great compliment). Many women said that they are reading the book along with their mothers or their husbands and discussing the ideas in them. I am deeply thankful that the book is resonating with so many readers.

What’s your next novel about?
I’m working on a historical novel about a strong woman who fights the British during their occupation of India. Another strong and complex female character. Her name must remain a secret for now!