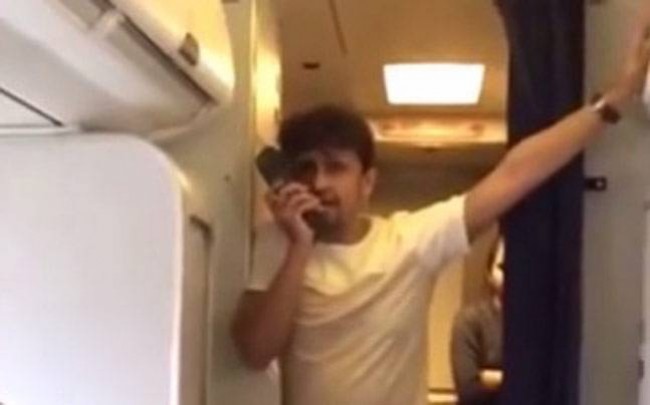 Mumbai, Feb 5 (IANS) Airline major Jet Airways said on Friday that it has suspended the five-member cabin crew of its January 4 Jodhpur-Mumbai flight for allowing celebrated singer Sonu Nigam to use the in-flight announcement system to entertain his fellow passengers.

“All cabin crew on the flight have been taken off from flight duty for enquiry and corrective training to reinforce strict adherence to operating procedures,” said a Jet Airways spokesperson.

According to aviation safety experts, the unauthorised use of any aircraft system by passengers is a recipe for disaster.

“This is a vital information system, which is used by the crew to alert and inform passengers about major safety related procedures, weather and issuing of turbulence warnings,” Kanu Gohain, safety expert and ex-director general of the Directorate General of Civil Aviation (DGCA) told IANS.

“If an emergency would have occurred at that time, then the crew would have lost valuable time in informing passengers. This (concert) also diverts the attention of the crew from other duties,” elaborated Gohain, who was the DGCA Chief from April 2006 till 2008.

Sources in the aviation watchdog said an enquiry has been initiated into the event.

“There has been a lapse in discharging of crew duty. If found guilty then there (cabin crew’s) licenses can be repealed and they would not be eligible to work with any airlines,” Gohain added.

Cabin crew have to take a DGCA examination which is partly based on safety and emergency procedures (SEPs) and in-flight operation guidelines.

Online videos uploaded by some passengers show Sonu, dressed casually in a t-shirt and jeans, leaning against a bulkhead as he sings two of his popular songs from the films “Veer Zaara” and “Refugee”.

Sonu has termed as “real intolerance” the Jet Airways’ decision.

“To suspend crew members for asking me to sing on the address system, when the seat belt signs were off, and no announcements were to be made, is nothing less than punishing someone for spreading happiness.

“Pity there’s no one to question such harshness except the media perhaps. Indians, need to loosen up. This act of lack of common Sense, according to me, is real intolerance.”