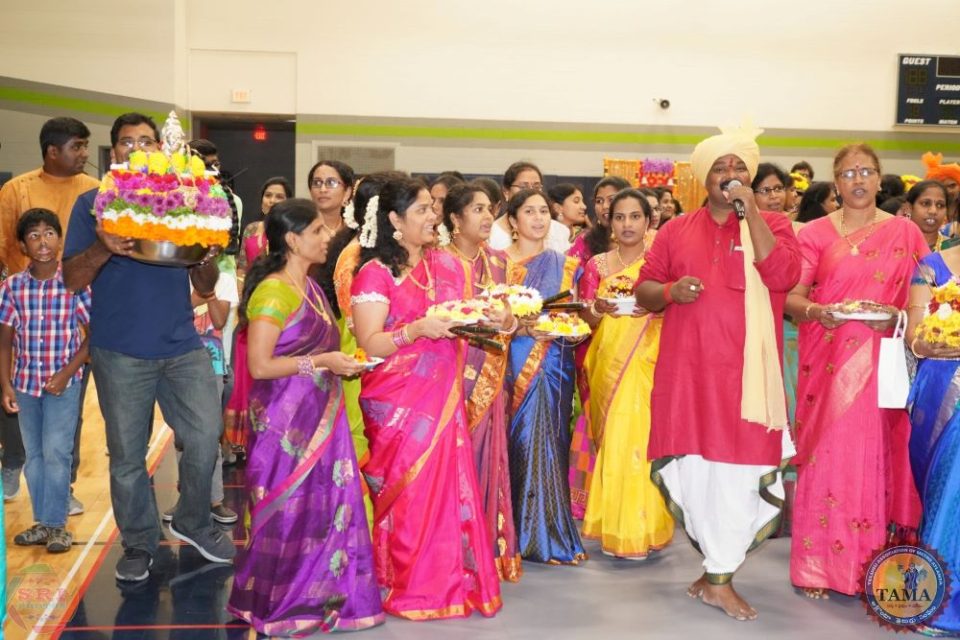 Atlanta, GA, October 10, 2019: A magical splash of colors. A well-coordinated display of music and dance. A perfect blend of joy and ecstasy… the mood and tone set at the first-ever Dussehra & Bathukamma celebration by Telugu Association of Metro Atlanta (TAMA) celebrated on Saturday, September 28, 2019, at DeSana Middle School, Alpharetta, Georgia was beyond explicable.

‘Bathukamma’, meaning ‘Oh Goddess come back to life’, is a festival celebrated by Telugu speaking people all over the world during September-Octobers months (known as ‘Badhrapada Masam’ in Telugu). Women arrange Bathukamma in several layers of colorful flowers, topped by Gouramma made with turmeric and two incense sticks. This Bathukamma is played for nine days followed by Vijaya Dashami also known as Dussehra. This festival is very popular in the Telangana region.

Enthusiasts wearing colorful festive attire started arriving from 2 pm. By 3:30 pm the hall was filled with about 1700 women, men, kids, and visiting parents. The audience of all ages were glued to their seats when several songs and dance dramas were presented. Dances choreographed by reputed music and dance teachers like Sasikala Penumarthy, Neelima Gaddamanugu, Hema Shilpa Uppala, Santi Medicherla, Sreedevi Dadithota, Srivalli Sridhar and Madhavi Dasyam. have attracted the attendees. The emcees of the event Raaga Vahini and KT Sravanthi did an awesome job.

The Guest Singer who came all the way from India exclusively to entertain TAMA’s Bathukamma, Dr. Srinivas Linga, Choreographer, Folk Singer, Dappu and Drums Artist, was simply brilliant and was rocking the show! After being introduced by the Cultural Secretary of TAMA, Subbarao Maddali, he displayed a unique talent of connecting with the audience in every which way you can imagine. He quickly friends with everyone by addressing folks in the hall affectionately – women as ‘Akkalu’ and men and ‘Annalu’. He sang several folk numbers popular in three different regions of the Telugu States – Rayalaseema, Coastal Andhra and Telangana. He had asked several trivia questions about Bathukamma and gave away prizes to those who answered the questions correctly.

Around 5:30 pm the actual ‘Bathukamma Aata Paata’ started. In this, women place all their Bathukammas and form a circle around them. They keep moving towards the right side by singing and dancing rhythmically. About 500 women and 100 kids participated in this play followed by Kolaatam (Dandiya) for more than two hours. Dr. Srinivas sang dozens of songs while women played Bathukamma. Around 7 pm before the Bathukammas were immersed (Nimajjanam), Prizes were distributed to winners. There were two categories with three levels of Prizes. Two of these prizes were sponsored by Ramesh Annabathula, Realtor and Viju Chiluveru, Director TAMA Board. Bathukamma Trivia prizes were sponsored by Priya Balusu and Kolaatam sticks were sponsored by Mahesh Pawar. Sneha Bukkarayasamudram, a community volunteer, along with Kanaka Lakshmi Chintala and Geeta Vedula have selected a few Bathukammas based on certain criteria.

Serving food was a big task. About 50 volunteers handled about 1700 people who lined up for dinner served free. Many who ate said the food and the service were absolutely flawless and were appreciative of the organizers. Food serving started around 6:30 pm and went beyond 10:30 pm.

TAMA Officers and Volunteers have spent countless hours with enthusiasm. Their hard work finally paid off in the form of happiness and soul-satisfaction. All their faces were full of joy and contentment in the heart. TAMA, a premiere Organization of Telugu Speaking Indian Americans in Metro Atlanta organizes several festive, community, educative and sports events throughout the year. To learn more about TAMA visit www.tama.org.