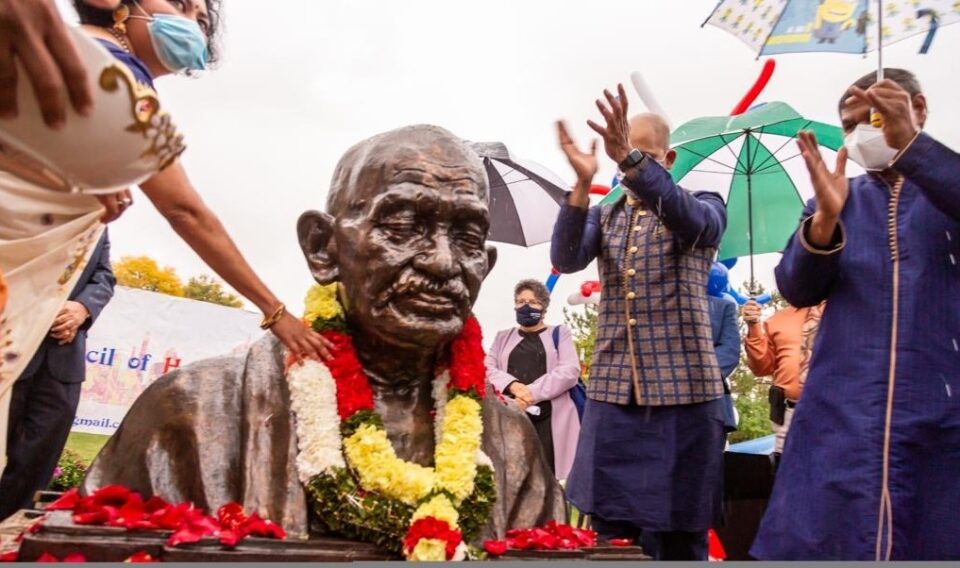 New York, Oct 7 (IANS) A town in New York has paid tribute to Gandhi’s global role promoting non-violence and peace by installing his bust even as memorials to the Mahatma have come under attack in some places in the US from radical groups.

Amherst received the message of peace embodied in the statue put up through community initiative on Gandhi Jayanti joining several places across the US that have statues honoring the Mahatma.

The Council of Heritage and Arts of India (CHAI) spearheaded the effort for installing the bust sculpted by Ram Sutar, well known for his portrayals of Gandhi.

The organization raised $40,000 for the statue, some of it through GoFundMe, the digital fundraising site.

CHAI Executive Director Sibu Nair told IANS he decided to bring the statue to Amherst because Gandhi’s undying ideology that transcends the physical is important at a time when the US and the world are divided by hate and violence.

“I thought of taking a small step in our town by making a Gandhi monument” because, he said, “Gandhi is not just the name of a person but it’s an ideology or way of life which never dies. In the current world his message is very important. World is full of hate and violence.”

That message has a special resonance because Gandhi has been drawn into the hate and violence roiling the US and the addition of a statue in Amherst defies the attacks on his image.

Vandals took advantage of protests against brutality in Washington to deface Gandhi’s statues with personal hate messages in June.

Another statue of Gandhi was vandalised in Davies in California.

Petitions have been circulated by radicals and extremists to have the statues on Davies and in Fresno removed.

President Donald Trump’s Spokesperson Kayleigh McEnany has denounced what she said were efforts by “radical left-wing mobs” to tear down statues of Gandhi and of American leaders like George Washington.