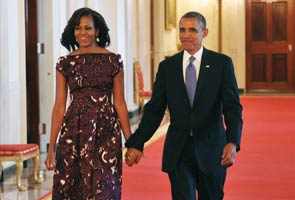 “The President and First Lady are going out to dinner to celebrate his birthday,” the White House said Thursday.

Obama, who turned 52 on Sunday, had spent his birthday weekend celebrating with friends and family at Camp David.

Pool reports did not say what the Obamas chose, but according to its website, Rasika in Washington’s West End serves modern Indian cuisine, showcasing tawa (griddle), sigri (open barbeque), tandoori and regional dishes.

It offers “small plates, a modern lounge, and a temperature controlled wine cellar.”

Like most of their restaurant outings, Thursday night’s private dinner was kept off the record until the Obamas arrived at the restaurant, ABC reported.

Once word got out, a large crowd of people eager to catch a glimpse of the president and first lady gathered across the street from the restaurant, the channel said.

Mrs. Obama got dressed up for dinner. Leaving the White House earlier, she was spotted wearing a knee-length, backless black dress. The president was dressed in his usual suit.