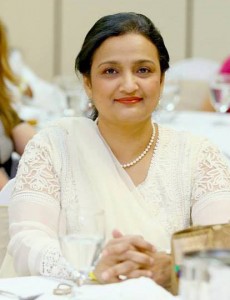 Ten years ago, after six failed attempts, I finally got my Georgia driver’s license. I was euphoric. I had conquered my intense road phobia. Conquering my world was the next step. Around that time, a media friend suggested that I launch a newspaper. I took that idea on a whim, and made it my life.

NRI Pulse was a fledgling online magazine in those days. But I decided that for the print edition, I would go back to my background in newspaper journalism. Thus, NRI Pulse Newspaper was born in July 2006 and launched at the American Association of Physicians of Indian Origin (AAPI) convention in Atlanta.

Holding the first issue of NRI Pulse gave me a thrill beyond compare. I had created something out of nothing. It was my second baby (the first one is a flesh and bones young man). In retrospect, I must say, I was impulsive and naive. How does a newspaper survive? Having a wealthy owner was the traditional way. But NRI Pulse was launched with zero capital. All I had was a very small group of large-hearted community business owners who supported the newspaper because they believed in my vision (and I thank them, our advertisers, from the bottom of my heart.).

We’ve had to sweat it out through the years. We’ve had our fair share of challenges, disappointments and heartaches. But along the way, there have been many encouraging moments- awards from the Atlanta community, making publishing history after being recognized by the Limca Book of Records as the first Indian woman to edit and publish a newspaper outside India, being featured in major Indian publications. But most importantly, our community relies on NRI Pulse as an important and reliable news source. We are reaching more and more people each month. I believe that NRI Pulse survived because of passion and perseverance- two important qualities for a business or individual to succeed at anything.

How has the nature of the newspaper business changed in 10 years? For one, being tech and social media savvy is an absolute must today. Until a few years ago, the focus of our business was the print edition. Our website was in basic HTML which I had designed myself in 2004. We updated it only once a month. But then, Facebook happened to the world. And Twitter and LinkedIn. It provided us with a great opportunity to bring news to our readers as it happened. Of course, this meant that we had to first update our website everyday. So we moved from a static HTML website to Word Press, and have been dutifully updating it several times everyday.

The rewards from a world connected via social media are high. For instance, a single post on #IndiansOfAtlanta, a blog and Facebook community managed by NRI Pulse, gets anywhere from 20,000 to 80,000 views in 48 hours! On the flip side, this also means that more and more people and associations are using local Facebook and Whatsapp groups to buy/sell and promote their events free of cost without having to advertise in traditional media.

Where does that leave the print edition? Does it have a future? I believe it does. As long as we are able to connect with our readers, they will always pick up a free copy. Despite unlimited access to Internet news stories, there is something wholly satisfying about holding a crisp copy of a newspaper or magazine in your hands. It is said that a newspaper offers peripheral vision. People tend to read and absorb more, rather than skim through headlines, which they are likely to do online. According to a Pew Center research, those who still read a newspaper are higher-earning and better-educated. Our community fits this description perfectly, which augurs well for our publication.

Our business model for the next two years involves new projects that will be unveiled in the days to come. As I steer our newspaper into the future, I take strength from the love of the community we serve, and the belief that innovative ideas and tenacity are an editor’s strong suits.

The road may be winding, but we are novices no more!