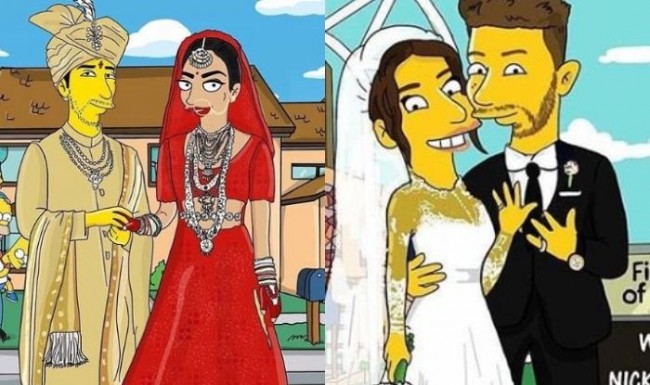 London, Dec 25 (IANS) Actress Priyanka Chopra and her singer husband Nick Jonas have become a part of “The Simpsons” family with their own caricatured characters.

Priyanka, who is spending Christmas with her family in London, on Tuesday took to Instagram to share “The Simpsons” renditions by illustrators Stefano Monda and Rino Russo.

Earlier this month, Priyanka and Jonas had three-day wedding festivities at Jodhpur’s royal Umaid Bhawan Palace, where they exchanged wedding vows as per both Christian and Hindu rituals in two separate ceremonies.

Wearing a hand-beaded and embroidered Ralph Lauren gown with a 75-foot long veil, Priyanka looked ethereal at her Christian wedding ceremony. For the Hindu wedding ceremony, Priyanka sported a deep red lehenga, choli and dupatta. She looked every bit the ‘desi’ bride with the chooda, kaleere and garland. Nick ported a sherwani and a turban.

In one of “The Simpsons” artwork, the couple is seen standing together as a married couple in a traditional ‘desi’ attire as the Simpson family looks on. And in the second they are seen in Christian wedding dresses with Homer Simpson officiating the ceremony.

The two have the perfect Simpson look with protruding upper lips.

While fans loved “The Simpsons” twist to their wedding festivities, some fans were wondering about the different skin tone in both the images.

One user wrote: “Your skin is changing more colour than that of a white man”, and another wrote: “I am confused. You’re brown skinned in the other and yellow skinned here?”