Atlanta, GA, May 7 2017: Eshana Enterprise hosted a melodious event, “Geeton ka Safar” on Saturday, April 8 in Atlanta.  Originally from Houston,Texas, I had the wonderful opportunity to attend this show while on my business trip here. The show was well attended and the hall was packed with music lovers like me, even though there were three other competing musical shows in Atlanta in the same weekend, one of which happened to be at the same time as this event. Atlanta definitely seems like a music lover’s city!

“Geeto Ka Safar” which means a musical journey, was a program that was led by two renowned singers, Radha Mangeshkar and Hrishikesh Ranade. 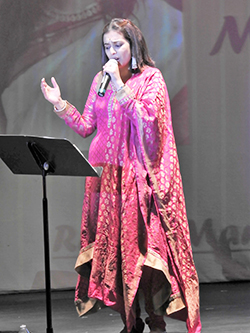 Radha, an accomplished singer and composer started her musical journey at the very young age of 7.  She has been performing Bhavsargam and has also performed in numerous shows such as ‘Shivkalyan Raja’, ‘Nakshatran Che Dene’, ‘Akshay Gane Abhanga Gane’, ‘Dil Ki Nazar Se,’ and ‘Didi ani Mi’.  Radha is the daughter of famous singer/music composer Pandit Hridaynath Mangeshkar and the niece of Lata Mangeshkar and Asha Bhosale and there simply cannot be any question about her musical talent, voice and experience.

Hrishikesh Ranade is an Indian playback singer in the Marathi film industry and winner of the “Idea Sa Re Ga MaPa Maharashtracha Ajacha Awaaj Award”. Hrishikesh also comes from a “music loving family” and his father Pramod Ranade is also a well-known Marathi singer. He took his initial training from Pandit Vijay Koparkar and Shekhar Kumbhojkar.  He has sung songs in various films such as Mumbai-Pune-Mumbai, Tuzya Mazya Sansarala Aani Kay Hava, Kadhi Tu and many many more.

Radha and Hrishikesh started the musical journey with old melodies of Lata Mangeshkar and Mukesh.  Songs such as “Kahin Door Jab Din Dhal Jaye” from the well-known movie “Anand”, “Woh chand khila” from the movie “Anari” reminded everyone of yester year’s famous pairs Raj Kapoor and Nutan. “Lag Jaa Gale” by Radha reminded the audience of the pair Sadhana and Manoj Kumar. The song was originally sung by Lata Mangeshkar in the movie “Woh Kaun Thi”. 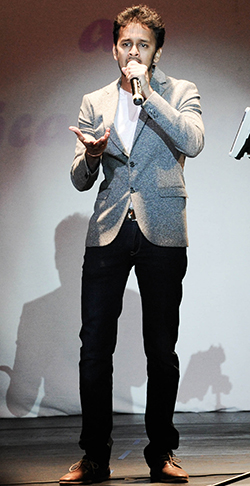 Hrishikesh sang a medley songs out of which one of the most memorable transition, was from “Yeh jo mohabbat hai” to “Kehna hai aaj tumse” a superhit classic reminding the audience about Sunil Dutt, Saira Banu and Kishore Kumar from the hit movie “Padosan”.  Towards the middle of the concert, Hrishikesh changed the tone from romantic melodies to a lively more upbeat theme with the 1977 movie “Hum Kisise Kum Naheen – Bachana aye Hasino”.

Any musician would appreciate the skill level of Hrishikesh who successfully drove the audience through this beautiful journey. Credit for this musical night equally goes to the trio of musicians Kedar Paranjape, Vivek Paranjape, and Vikram Bhatt who actually did the job of an orchestra of perhaps 50+ musicians.  Vivek Paranjape has accompanied Lata Mangeshkar and Kishore Kumar on various international tours and continues to visitUSAwith other musicians. Kedar worked with Vivek on several musical tunes from different instruments like the sitar, guitar, flute and many more just from their keyboards which sounded exactly like the musical instruments played in the movie songs sung by Radha and Hrishikesh.

Radha’s “Tujse naaraz nahi” sounded so beautiful that the audience almost thought they were in a Lata Mangeshkar concert. She picked a unique theme for her songs, which she said is like a “Ghost” theme”.  She successfully proved that there was so much melody in these songs especially “Aaja re pardesi ” from famous movie “Madhumati” in which Dilip Kumar searches for Vyjayantimala Bali.

Hrishikesh then took the audience to melodious songs of the newer generation such as “Abhi Mujh mein kahin” sung by Sonu Nigam from the well-known movie Agneepath to his own song from a super hit Marathi movie “Mumbai Pune Mumbai” which reminded audience of the stunning pair of Swapnil Joshi and Mukta Barve.  A song well sung by a god gifted voice for sure with a perfect 10/10 score. Radha sang “Mehndi rang lagyo” from a Gujarati Movie and also sang some songs in Punjabi.

The duo then moved on to a few gazals and then to some great numbers like “Inhi logo ne” from famous movie “Pakeeza” to“Pinjarey wali muniya” by Hrishikesh. Towards the end of this phenomenal show the audience was clapping and dancing with every beat played, and every note that was sung.

What can be more colorful than a musical journey that takes you through all the emotions of sadness, happiness, curiosity, romance and that too in different languages such as Hindi, Marathi, Gujarati and Punjabi?  The audience would definitely agree that this was simply an amazing show that left the audience wanting for more.

A special thanks to all the volunteers, organizers, Arati Reddy of Eshana Enterprise, Mustafa Ajmeri, national promoters Mohit Chitnis and Five Dimensions, Divinity Audio Visuals for sound and Pixel Collection for photography.  A truly memorable event for many attendees!

For more information about this event log on to: