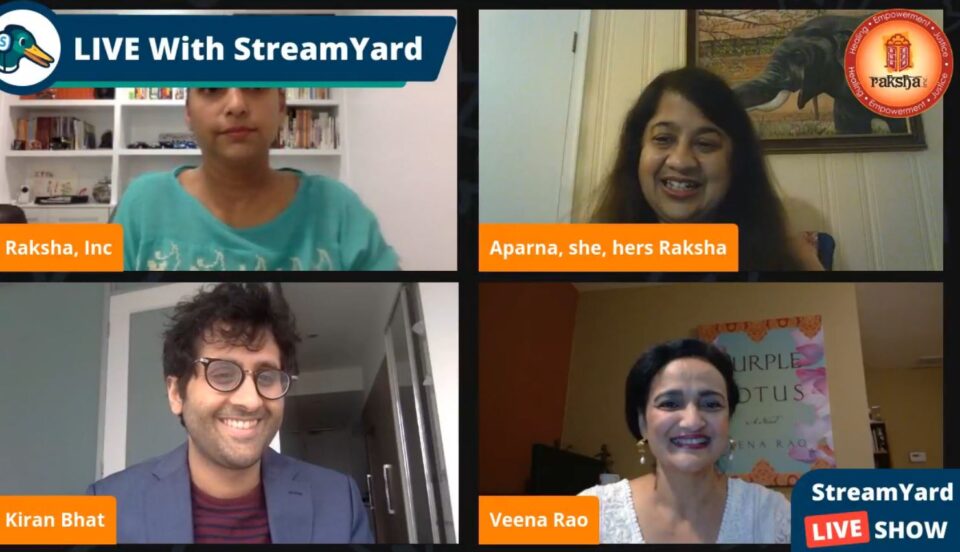 Atlanta, GA, October 30, 2020: Kisi mannat se kam nahi hai, Mera ghar jannat se kam nahi hain (Nothing short of a blessing, my home is no less than heaven itself) – David Singh Rathour delightfully captures the significance of a home in his lyrical couplet. And yet, home is hardly the blessing, much less a heaven, for millions. On an average, nearly 10 million women and men are physically abused by an intimate partner each year in the United States. In Georgia, 35.1% of women and 39.9% of men experience intimate partner physical violence, sexual violence and/or stalking. 1 in 15 children are exposed to intimate partner violence each year, and 90% of these children are eyewitnesses to this violence.

Recognizing the need to advocate for the cause, October is declared the National Domestic Violence Awareness (DVA) month. In honor of this, Raksha, Inc. an Atlanta-based nonprofit organization spotlighted Veena Rao, whose debut novel ‘Purple Lotus’ addresses intersectional themes relevant to DVA in a contemporary setting, ranging from cultural conditioning to relationship power dynamics, while painting a vivid picture of the protagonist’s abuse and trauma and the journey from survival to self-worth.

Rao is also the publisher and editor-in-chief of NRI Pulse newspaper. Author Kiran Bhat joined as the as co-moderator, creating an engaging author dialogue with Rao. Bhat is a multilingual author, polyglot of twelve languages and traveler of experience in 134 countries. The event included excerpt reading by the author, live Q&A and discussion on domestic violence in the context of cultural hybridity, immigrant culture perspectives.

An excerpt Rao chose to read from Purple Lotus highlighted abuse in one of its most subtle yet substantial form – the emotional kind, where Sanjay, the husband, casually undermines Tara, his new wife who moved to the US from India, after an arranged marriage. Tara’s helplessness was palpable.  “I think Tara is based on every woman who has ever felt vulnerable, or inadequate, or fearful, or powerless over her situation,” said Rao. “I see incidents of domestic violence all around me. I’ve seen it growing up in Mangalore, and now in Atlanta. Domestic violence transcends time, race and culture.”

Highlighting the issue of victim shaming, as Tara experiences in the narrative, Rao noted that in patriarchal communities, “the entire burden of making the marriage work, is on the woman, she is still expected to either try harder, keep her husband happy, or if she does find the courage to leave, she is either shunned by the community, or she has to live with labels.”

“Writers don’t have the moral obligation to talk about social issues. But because I’m a journalist, and have worked so long in the community, I did feel a sense of responsibility to talk about issues that affect us- like domestic violence, or patriarchy. As an Indian immigrant, and as a journalist I wanted to create grounds for healthy conversations not only on this topic, but also topics such as family honor, shame, and mental health,” said Rao when co-moderator Bhat asked if being a journalist affected her writing.

Included in the topics of discussion was the cultural aspects that make it harder for a victim from South Asian communities to stand up for themselves. As Bhattacharya noted, despite claims of a progressive society, when someone’s getting a divorce, there’s “that look”. The culture of emphasis on the importance of getting married, and staying in it, engrained into a girl’s being from very early on, the stigma of divorce, compounded by immigration issues that prevent spouses on certain visas from working and therefore being dependent financially, play a huge role in underreporting or simply enduring the pain inflicted upon them, she added. Bhattacharya also emphasized on the mental health issues of the victim that go largely ignored but tend to further distress the victim.

Bhattacharya also spoke about her experiences in helping victims seek asylum or gender-based asylum, which comes with its own set of challenges, as she explained.

When a viewer asked Rao about what evoked resilience in her protagonist Tara, Rao said realization of one’s own self-worth lies at the core of turning resilient. Bhattacharya, through her experiences in dealing with victims, underlined the importance of empowering a survivor. “I think one of the biggest things, is to remind the survivor of violence, that they are the experts in their own lives, and that they have the power within themselves. Often what happens is, we get into this place of wanting people to leave on our timeline, and when we think they should leave, and the reality is leaving can also be dangerous, you know, survivors are more likely to be severely harmed or even killed when they’re leaving, than in any other time their relationship, because it’s when the abuser realizes they no longer have power over that individual. And so, when the person realizes they no longer have power, it is more dangerous. So, part of it is letting experts lead, giving them the tools and the information and being safe, and continuing to uplift them, remind them of their power and remind them of their strengths, and slowly work with them, and guide them to check up on them.” Bhattacharya added that it is important to only make promises that you can keep, when helping a victim.

What is the one message survivors can take away from your book, Bhattacharya asked Rao. “There’s hope, even if you feel inadequate, or powerless or fearful. And it’s never too late to take control of your life. Live, don’t just exist. I hope readers will also understand that not all women who are caught in an abusive situation have the same choices. So, I hope the people who are trapped in a bad situation will feel encouraged to take care of themselves and to believe in their own worth, and to seek help and support. And I hope we as a community can do more for such women,” said Rao.

Despite the exponential rise of South Asian population in Georgia, few resources exist to meet the needs of victims of domestic violence among the linguistically and culturally diverse community.

Community-based surveys by University of Wyoming professor Neely Mahapatra in 2012 and University of California, San Diego, professors Anita Raj and Jay G Silverman in 2002 found that nearly 40% of South Asian women in the US experienced intimate partner violence. Based on the 2018 American Community Survey, Indians make up over 80% of South Asians in the US, alongside people who trace their heritage to Bangladesh, Bhutan, Maldives, Nepal, Pakistan and Sri Lanka.

Organizations such as Raksha who work with victims of DVA estimate the number to be much higher. A culture of patriarchy, legal and financial dependency upon husbands and victim-shaming practice render south Asian women vulnerable, and also contribute to underreporting, noted Aparna Bhattacharya, Executive Director, Raksha.

One of the many reasons why cases of abuse are under reported in South Asian communities can be traced back to its roots. When you contrast with western culture, which tends to focus on individualism, South Asian cultures place a value on collectivism and a strong and cohesive family unit. Individual preferences, whether it may be as simple as food or significant as a career choice, tend to come in second, to the importance of the group, especially in the family. This conditioning manifests itself in aspects of marriage, including working at any cost to keep the family together, or staying silent when abuse strikes. Only the price victims pay is very high.

Long before the current pandemic crisis crippled the world, the virus of domestic violence, had spread far and wide, affecting families and kids in ways unfathomable. Lockdown and restriction periods acted as a catalyst, spiking incidents of abuse. Pandemic or not, restrictions or not, the abuse persists. Organizations such as Raksha which are few and far between, try their best to help victims and survivors of abuse. In honor of its 25th year of supporting the community, Raksha is hosting a series of events and raising funds for the cause. To support their cause, please visit https://www.raksha.org/.

Those interested in purchasing Rao’s novel can visit https://www.amazon.com/Purple-Lotus-Novel-Veena-Rao/dp/1631527614