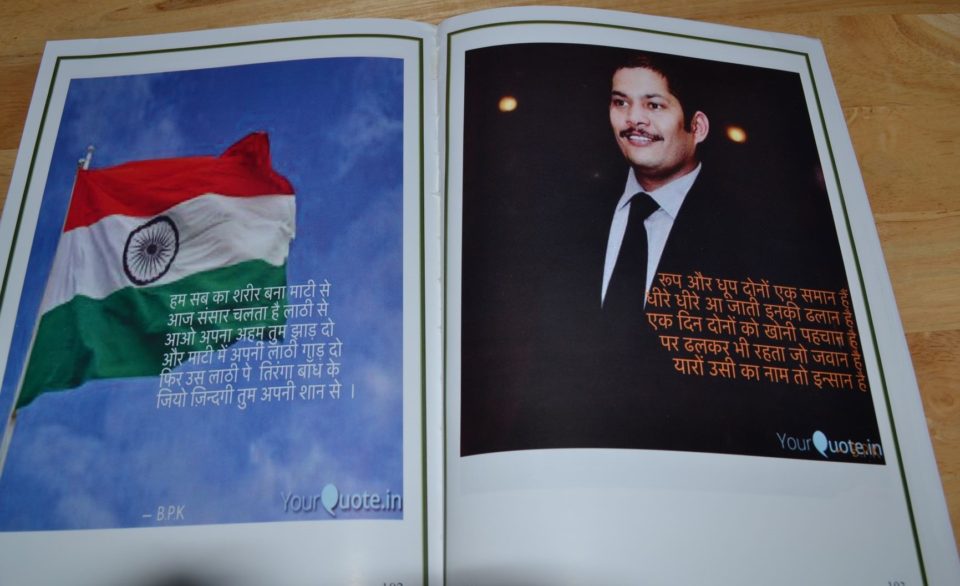 Many people in the community know Bikash Kumar as a conscientious, compassionate and focused bureaucrat in the Consulate General of India in Atlanta, who also writes poetry.

Kumar has taken his poetry writing skills to the next step with his just published first book, ‘Pratibha ka Vikas’, a collection of more than fifty poems, on varied topics. Initially only 200 copies of ‘Pratibha ka Vikas’ have been printed.

His prize-winning poem “Genda aur Gulab” is included in his book. A few poems “Samosa”, “Sone ke Daant” (Teeth of Gold’),’’ “Vartalaap” (Conversation) and “Samman” (Respect) are amusing. In the poem “Jeevan ki sikh”(Counsel for living), a tiny  twinkling star advises the moon not to be proud of its shape and size, to  be humble and learn to light up the dark night together with it.

In the poem “Make in India,” he calls on the nation to work together to end poverty, provide jobs and skills training for the young generation, help farmers, help in fulfilling the ‘Swatchh Bharat’campaign and help India attain progress at a rapid pace. He applauds the ‘Notebandi’ measure initiated to uproot black money, corruption and terrorism.

In his poem “Aarakshan” (Reservation), he says God has made all equal and it is high time to get rid of class and communal divide, sectarian dogmas, untouchability, discrimination of any kind and end reservation. In his poem, “Rishte” (Relationships) he pleads to the neighboring country to shun terror and extend hand of  friendship. In “Maa”, ”Maa ko naman” and “Buzurg” (Respected elders) he pays tribute to the love and sacrifices of his own mother as well as all mothers and venerable elders. The poem “Dahej” (Dowry) deals with the social evil of dowry. The poet implores all to end this practice which results in gender inequality, domestic violence, financial burden on girl’s parents, etc.

Kumar uses simple but effective words to convey his thoughts and feelings. He is a keen observer of nature and life around him. His poems reflect self-introspection, self-discovery, optimism, hope, inspiration, motivation and patriotism.

Kumar was born in 1982 in Bihar to a government office. He is married and has two children. He earned an Economics Honors degree from Vinoba Bhave University, Hazaribag, Jharkhand. After graduation, he worked for Indian Railways from 2007 to 2012. His former boss Santosh Kumar Jha in the Indian Railways motivated him to write poetry. He wrote his first poem Genda aur Gulab (Marigold and Rose), which won third prize in a Hindi diwas competition organized at the Western Railway Headquarters, Church Gate, Mumbai.

After being selected in the Indian Foreign Service group B in 2012, he joined the Ministry of External Affairs Headquarters, New Delhi and was assigned to the highest office of External Affairs Minister S. M. Krishna and later also worked under  Salman Khurshid. In April 2013, he was posted to the Embassy of India Tripoli, Libya, which was going through a critical period after the assassination of Gaddafi. After completion of his tenure in Libya, he was transferred to the Indian Consulate in Atlanta in September 2015.

His hobbies are playing cricket and listening to music but he enjoys reading (Hindi/English) and writing Hindi poetry the most. His mother Pratima Sinha’s blessings have inspired him most to write poetry. He is an admirer of the iconic Hindi poet, author and essayist, Munshi Prem Chand.

Bikash Kumar is well versed in Hindi, Bhojpuri and English. “My future goal is to be a good writer and with God’s blessings, a noted Hindi poet,” he says.

This debut book of deeply moving, thoughtful,and engaging poems is a must read for all, especially the younger generation.

Tips for high school students to make the summer productive