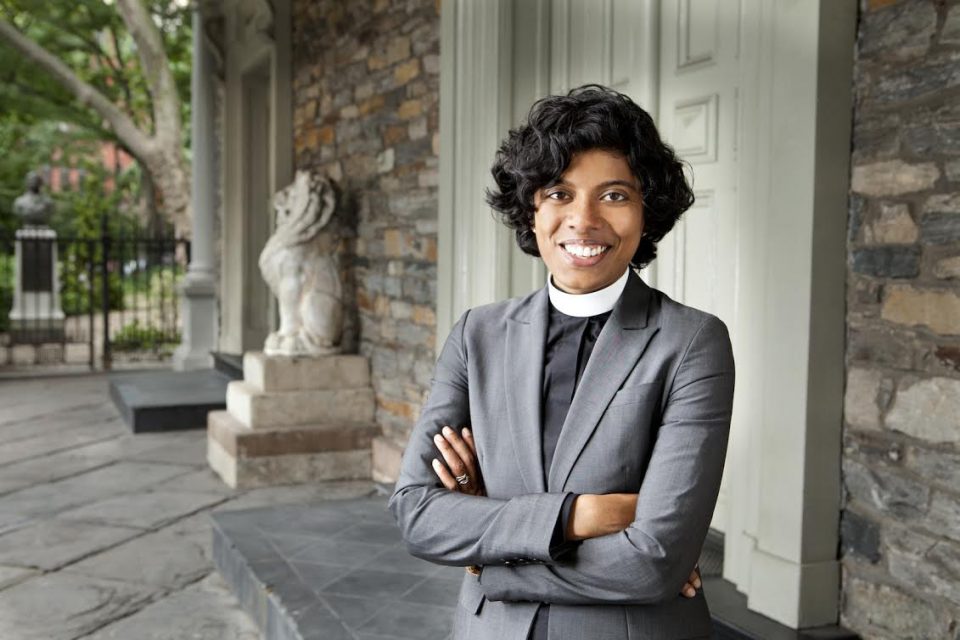 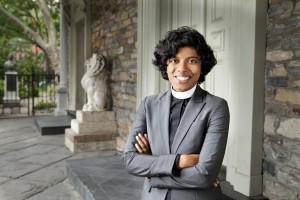 At first sight, she looks like any other woman of color, an immigrant, a stereotypical conjecture in the American imagination. The Reverend Winnie Varghese is both that, as well as an exception to the rule. She is the first woman Priest or Rector (her official title in the church website), that too a woman of color, in a long Episcopal tradition at the St Marks Church- in- the- Bowery.

Narrates Reverend Varghese of how her job at the church came to be. “I love my job. When I arrived in 2009 there was a sense among the congregation, which was just a handful of people by that time, that they had hit bottom. They had part time clergy from the 1970s – 2009, but the one right before me lasted all of 6 days. A new low for them. It was a complicated community with enormous potential and good values charged with caring for an important historic site. St. Mark’s is the burial place of the last Dutch Governor General of New York,  three governors of New York, and hundreds of the who’s who of early New York. It has had a reputation for cutting edge arts in the last century and some political and community involvement. With that great history it had struggled like many places to be a congregation, at a time when many main line, historic, liberal denominations were declining. They had told themselves that decline was inevitable, even though many churches like them around them were thriving.”

Accordingly, the Reverend Winnie Varghese had her job cut out for her.

Located in the East Village neighborhood of Manhattan in New York city St Marks at Bowery has some interesting facts. Wikipedia  reveals that it is the second oldest church in New York and that the famous poet Khalil Gibran was appointed member of the St Marks Art Committee in 1919. Community spirit and the progressive nature of the church is what makes its staff and parishioners unique, so that, even today there is a warmth and liveliness to the Sunday congregation, claims Reverend Verghese, that is rare to find in a Church these days.

Despite the extraordinary nature of her current life, much of her upbringing was not too different from the lot of the other immigrants during her parents’ early years in the United States. Born in Texas, raised in Kottyam till a young age, Winnie Varghese returned with her family to the United States and grew up in Texas. Reverend Varghese admits that her family was a working middle class (her father was a clerk and her mother a registered nurse) and not ashamed of it. She credits her parents with open mindedness and support, especially in her eventual choice of an unusual career.

“I experienced a really strong call to become a priest when I was 17.It was very clear. I wasn’t a particularly religious 17 year old, so it was odd to me. My family is very religious. My parents are liberal Christians from a community that has been Christian a very long time. They have both had clergy, theologians and church workers in their families. I think they were as surprised as I was by the path I took, but they were also able to take seriously that it felt like a call. So, my parents have made this very easy for me. My own sense of needing to be successful has been more of a challenge for me!”

Though it is plausible to believe that opportunity may be unlimited and all dreams may come true, no one, not even a person of the church is free from the constraints and prejudices that comes from a society. Reverend Varghese finds salvation in the liberation narratives of the Bible that emboldened her to deal with the realities of her life. She says   I find the gospel’s message of cosmic and earthy justice so compelling. It literally gives me life. As a woman and a brown skinned one in the U.S. –those struggles resonate and liberate at a profound level. I live in a country where the color of my skin determines what worth people think I have. I have had all the experience anyone with dark skin who engages society will have. The challenge in my life has been to decide whether or not to generate enough wealth and privilege to remove myself from bigotry most of the time. I have done some of that, but in participating in liberation movements for others and myself and calling the church to faithfulness, I think one puts one’s self in vulnerable spots. People let me have it, fairly regularly, and have no clue that it is their racism that is made indignant by the sight of my face or the sound of my voice or the actual words that challenge them..”She adds that what also manages to keep her going is her sense of humor acquired over time.

But Reverend Varghese’s daily chores read like a list off a quaint village priest’s idyllic life filled with the warmth and the sense of belongingness of a shared community.  It belies the urgency with which everyday tasks such as preparing and writing sermons, budgeting and meeting with committees or raising funds as well as the challenges and obstacles that present itself both from within and outside. The unique position she finds herself in, both by virtue of her profession as well as her racial identity, contribute to her understanding of  what is required of her.  Moreover, even though her presence is a distinctive one in that there are not too many Indians in the Anglican Church, her heritage is part of a long Anglican tradition. “The greatest challenges for me have been to not conform to the church’s expectations or needs of a clergy woman with a brown face. It is tricky not to get swept up into other people’s battles or to be used as token in someone else’s game.” she asserts.

St Marks has kept up with technological interventions in everyday life. They have a website, a facebook page and group and even a twitter account. Social networking has enabled the church to cast a wider reach and attract both skeptics as well as the antagonists. And that is not the only indication of the progressive nature of the church. In several interviews, Reverend Varghese has admitted coming out at a very early age. Her work with marginalized people as well as what were limiting options before her at specific periods in her life have made her into a passionate activist. ” I am really interested in movements for social justice. So I serve on a few different bodies that work on labor, immigration, LGBT rights, and other similar areas. I think that’s the work of the gospel in the vernacular. Other members of our congregation keep us connected to other movements, locally and internationally.” she says. Her interest in social justice movements also bring her frequently to India.

Reverend Varghese is encouraged by the fact that an increasing number of Indians, in New York city, are active in social justice movements. Her parting message is a hopeful one. She says, “In my church I challenge my community and myself to do the things we are most afraid of doing, to challenge ourselves to be free from what holds us back and to reach out for support as we try to live differently. I think that’s what being human is about, and I would hope that for everyone.”