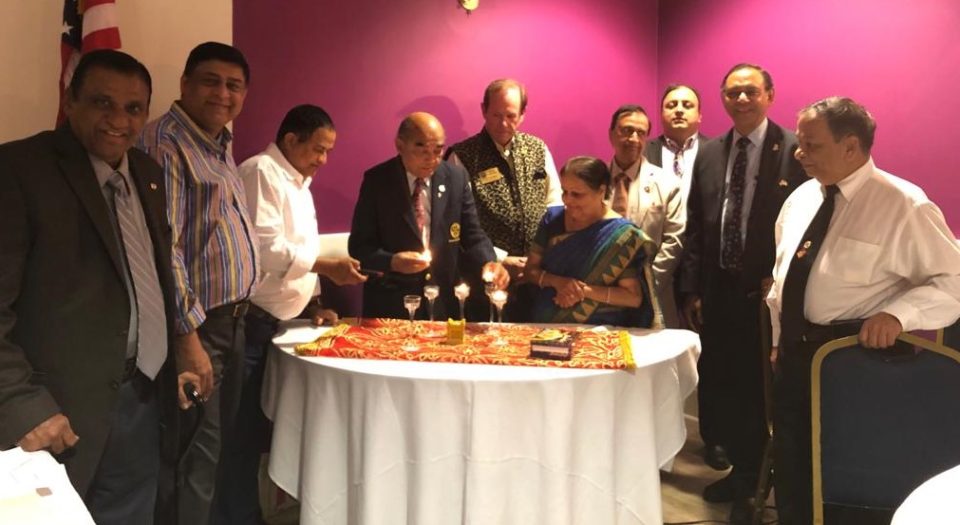 Atlanta, GA, November 8, 2019: Staying true to its motto, “Service above Self”, The Rotary Club of Emory Druid Hills (RCEDH), which has contributed to society in various ways held a multiple celebration night in honor of its 10th Anniversary, the World Polio Day, Diwali, and induction of two new members into RCEDH on October 23, 2019 at Ashiana Restaurant in Global Mall.

Past President and emcee Upendra Bhatt welcomed the audience.

“Each Rotarian is a leader who knows the way, goes the way and shows the way,” said Chittaranjan Jyotishi, President, RCEDH. He also introduced 6 members of Rotaract, the youth wing of Rotary, that was introduced to the charter this year. Jyotishi also delivered the devotional grace. The Pledge of Allegiance was led by Rani Singh and Nehal Vyas rendered the National Anthem.

“We are very proud to say that Polio is almost eradicated except for very few, much through the efforts of Polio Plus, and India is Polio free. Now the focus of Rotary International is to support Polio affected victims.” said Jyotishi.

“Our club is contributing $50K for a project, globalgram which maybe above $200K after matching from Rotary Foundation and our District Governor’s Fund. I want to congratulate Manoj Barot, Executive Director, Narayan Seva Sansthan, and Kumud Savla who donated all of the proceedings of her annual recital to the cause,” stated Jyothishi.

“I want to recognize the children aged 6 -18 who raised 33K at a 3-week long camp sponsored by the GCANA. Each camper was encouraged to select one of the hundreds of Indian children waiting for orthopedic surgery.  The campers then turned into entrepreneurs, selling lemonade, popcorn, and samosas, and even hugs to raise money,” elaborated Barot about the fundraising efforts of kids.

“Thank you, Rotary, for helping the people of India, in eradicating Polio at home and across the world. This is a great achievement. Rotarians are lighting lives,” said Consul Shailesh Lakhtakia, from the office of CGI, Atlanta, recognizing the contribution of Rotary.

Diwali was felicitated with the lighting of the lamp by the Mr and Mrs. Jyothishi, Consul Lakhtakia, Bob Hagan, Mustafa Ajmeri, Chandler Sharma, Upendra Bhatt and other Rotarians present at the event.

“Having been induced into Rotary 25 years ago, was one of the most life-altering events,” said Hagan who formally induced 2 new members, Ismail Ghanchi and Dr. Dilip Patel, to the club. He elaborated the rotary 4-way test to live by – Is it the truth? Is it fair to all concerned? Will it build Goodwill and better friendships? Will it be beneficial to all concerned? The new members were handed the Rotary pins. Hagan spoke about Rotary’s role in near eradication of Polio and urged to end the disease.

“Diwali is a festival of lights. And lights is an acronym. Life is good when hope, trust and service is involved. And that is what Rotary is, including elements of love, give, help, trust, and service. Diwali is not just for Indians, but for the whole world,” said Jyotishi.

Bhatt commended the various projects of RCEDH including safe drinking reserve osmosis water plants, Dialysis machines, CT Scan machine to hospital in India, Urology department equipment, completing over 1000 Cataract eye surgeries in India, helping victims of Haiti. “A Rotary club from California picked RCEDH to donate 50K, because they believe we will use it for the right purposes,” he added.

The night ended with a Ganesha song by Nehal Vyas, vote of thanks by Jyotishi and a sumptuous dinner.