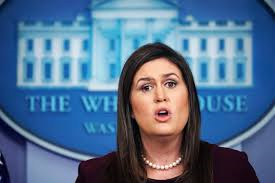 New York, April 21 (IANS) The United States denounced the Easter bombings in Sri Lanka as an affront to universal values and confirmed that many of its citizens were among the victims.

“We stand with the Sri Lankan government and people as they bring to justice the perpetrators of these despicable and senseless acts.”

“The United States offers heartfelt condolences to the great people of Sri Lanka.”

Secretary of State Mike Pompeo said: “We can confirm that several US citizens were among those killed. The US Embassy is working tirelessly to provide all possible assistance to the American citizens affected by the attacks and their families.”

He added: “Attacks on innocent people gathering in a place of worship or enjoying a holiday meal are affronts to the universal values and freedoms that we hold dear, and demonstrate yet again the brutal nature of radical terrorists whose sole aim is to threaten peace and security.”

In New York City, police department Chief Terence Monahana said, in a tweet, that although there was no known connection to city, police “officers will be seen at temples & churches as we remain steadfast in our mission to keep every New Yorker safe”.

Sympathy for the victims and outrage over terrorism poured in from US politicians on Twitter.

Former US President Barack Obama tweeted that the attacks “are an attack on humanity”.

“Today’s heartbreaking attacks in Sri Lanka come as the country has worked hard to build a common future after years of war”, Speaker Nancy Pelosi, a Democrat tweeted.

Former Secretary of State and presidential candidate Hillary Clinton tweeted: “On this holy weekend for many faiths, we must stand united against hatred and violence.”

Republican Senator Mitt Romney tweeted: “As we celebrate the miracle of Easter, we hold in our hearts the victims of the senseless violence in Sri Lanka and their loved ones. We pray that they may experience God’s eternal grace, comfort, and love.”

Aspirants for the Democratic Party’ presidential nomination joined the wave of sympathy.

“On a day devoted to love & peace, may we remember Jesus Christ’s message of love – for God & for each other – as we commit to defeating hate with love,” tweeted Representative Tulsi Gabbard, a Hindu American.

Senator Kamala Harris tweeted: “I am horrified by the attacks in Sri Lanka, where so many families were celebrating such a joyous day. Praying for the victims and their loved ones.”

Senator Elizabeth Warren tweeted: “To slaughter worshipers at church during Easter service is an act of great evil.”

“No person should have to fear for their life in their place of worship,” tweeted Bernie Sanders. “We must work to bring this world together around our common humanity.”