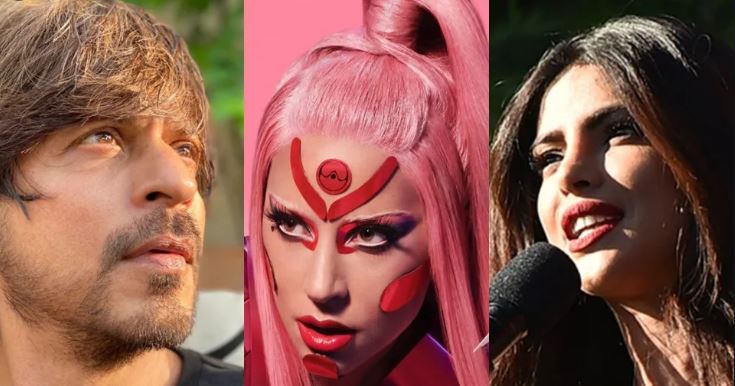 Los Angeles, April 7 (IANS) Bollywood actors Shah Rukh Khan and Priyanka Chopra Jonas along with names like Billie Eilish and Paul McCartney have united for pop star Lady Gaga’s One World: Together At Home, a mega live-streamed and televised benefit concert in support of the World Health Organization’s (WHO) Covid-19 solidarity response fund and in celebration of health workers around the world.

SRK and Priyanka are among several celebrities expected at the event, along with David Beckham, Idris and Sabrina Elba, Kerry Washington, and “Sesame Street” cast members.

Popular US talk show hosts Jimmy Fallon, Jimmy Kimmel and Stephen Colbertwill host the event, which broadcasts live across the US television networks ABC, CBS and NBC, as well as being streamed online on April 18.

BBC One will show an adapted version of the concert on April 19, including exclusive performances from UK artists and interviews with frontline health workers.

The details of the broadcast are yet to be announced.

The WHO and the social action platform Global Citizen have partnered to produce the event.

The latter’s Together at Home series, launched last month, has featured performances from artists in isolation including Shawn Mendes, Camila Cabello and Rufus Wainwright.

In a WHO press conference, Lady Gaga said she had helped to raise $35m for Global Citizen in the past week.

She said that One World was not a fundraising telethon and would focus on entertainment and messages of solidarity, with philanthropists and businesses urged to donate to the Covid-19 solidarity response fund ahead of the event.

“We may have to be apart physically for a little while, but we can still come together virtually to enjoy great music. The One World: Together at Home concert represents a powerful show of solidarity against a common threat,” WHO’s general director, Dr Tedros Adhanom Ghebreyesus, said.

Some US car insurers are refunding drivers stuck at home