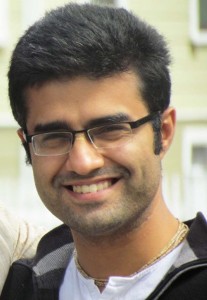 Bangalore, Sep 2 (IANS) Himanshu Asnani, 27, an Indian-born mathematics researcher at Stanford University Electrical Engineering School in the US, is the winner of the Marconi Society Paul Baran young scholar award for 2014.

“The prestigious award will be presented to Asnani at our annual event Oct 2 at the National Academies of Sciences in Washington, DC,” Society’s young scholar selection committee Bob Tkach told IANS through email Tuesday.

Asnani, who hails from Kota in Rajasthan, is also a system engineer at the Swedish telecom major’s R&D centre in the Silicon Valley, off the US west coast.

Though Asnani aspired to become a neurosurgeon as a child under the influence of his parents who are doctors, his exposure to mathematics and physics in teenage got him fourth rank in the IIT joint entrance exam.

Graduating from IIT-Bombay in electrical engineering in 2009, Asnani went to the US to do masters (MS) at Stanford and enrolled for Ph.D in the same subject.

Named after Nobel laureate Guglielmo Marconi, who invented radio, and set up in 1974 by his daughter Gioia Marconi Braga through an endowment, the Marconi Society awards annually outstanding individuals whose scope of work and influence emulate the principle of ‘creativity in service to humanity’ that inspired Marconi.

The award, with a cash prize of $400,000 (Rs.2.4 million), is given to scholars who are 27 or younger at the time of the nomination, as Marconi was 27 years when he invented the wireless telegraphy.

“In addition to citation and cash prize, the award provides travel stipends to its winners for many years to enable them attend our events, as we consider them to be an integral part of the Society,” Tkach said in the e-mail.

Asnani’s academic and entrepreneurial achievements also stood out in a review of the nominated researchers from the world over the society undertakes every year.

The award recognises individuals who demonstrate exceptional scientific talent and entrepreneurial skills at a young age with potential to make advances in telecom and internet.

“In studies too, Asnani made profound contributions to our understanding of the fundamental limits in new communication and data compression (point-to-point and multi-terminal). His work spans from theoretical to the applied,” his primary advisor at Stanford Tsachy Weissman said in a statement from the university.

Unlike many, Asnani is attracted to problems and is as passionate about understanding their theoretical underpinnings as he is about developing, implementing and experimenting with practical schemes that make a difference.

“What intrigued me was the idea that communication and networking could be used to connect and inspire people. By helping people share ideas and questions and answers, I was applying theory to real life problems with tangible impacts and outcomes,” Asnani noted.

Asnani’s initial research focused on cooperation in communication, which can boost the performance of a network.

“He developed insights and results of independent theoretical significance and uses them for guiding the design of new schemes in the motivating problem domains,” says Weissman observed.

Asnani’s assignments at Ericsson include designing next generation communication and computer networks. He also leads Ericsson’s collaborations with startup partners and vendors to port new features and applications in the cloud platform.

Through symposia, conferences, forums and publications, the Society also promotes awareness of major innovations in communication theory, technology and applications with particular attention to understanding how they change and benefit society.