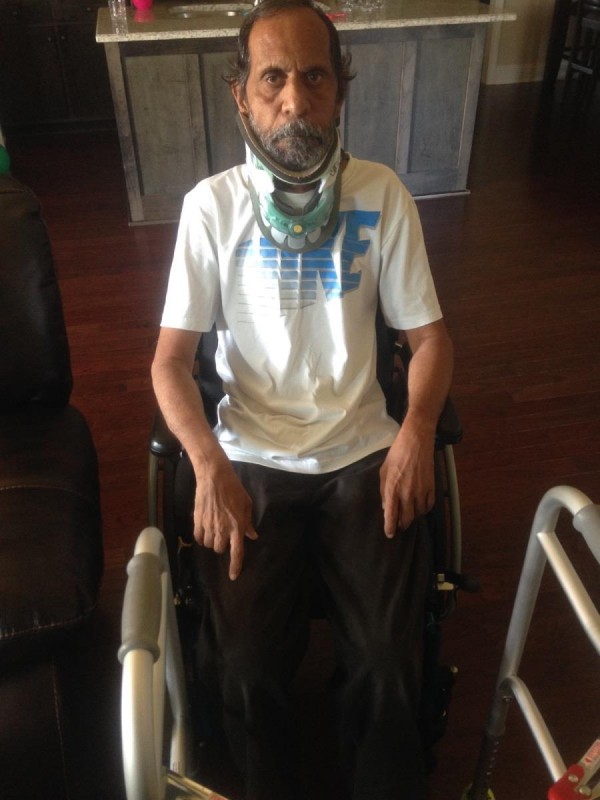 Atlanta, GA: “I did nothing wrong,” were the first words Sureshbhai Patel told his son Chirag before watching a police video of himself being brutally assaulted to the ground.

Sureshbhai Patel, 57, had arrived from India to the suburb of Madison in Huntsville, Alabama, to allow his daughter-in-law to go back to work by promising to care for his grandson.

Three and a half months later, NRI Pulse followed up with Chirag Patel to see how the family has been doing since the incident. As the hospital and physiotherapy bills continue to pile up, Patel spent 15 days in the hospital and a month after in rehab facilities, having returned home in April. He is now living with his family, but his health is still slow.

Patel had surgery performed on his spinal cord, having two vertebrae permanently fused. As his son is the only member of the family currently working, it has been financially very difficult for the Patels to cover the medical expenses. The local Indian community has been very supportive, donating money to a GOfund campaign that Patel has been using to pay the hospital and physiotherapy bills.

Patel has also received hundred of cards from all over the country, including Hawaii and even Canada.

Chirag describes his father as a closed off man who is not quick to reveal his true feelings; however, he is sure that his father and family have all been traumatized by the event.

“I told my mother that the system here is much better, but now I can’t be sure. I’d like for my father and mother to stay here with me, but we’ll see how they feel later on. The medical system in India is equal to America, but I would still feel more comfortable if my father stayed here with me. It all depends now emotionally where he wants to stay”.

“He can eat with his right hand now, and can walk with a walker, but his left leg still drags,” Chirag Patel continued. “He needs assistance using the bathroom, showering, changing clothes and so on.” According to medical professionals, a full recovery is not expected; however, they are optimistic that significant improvement is possible. The toll this incident will take on Patel’s mental and emotional health is yet to be seen.

“I try and encourage him to go for walks with me, but he refuses”, says Chirag Patel. “I’ve been working with the surgeon to see how much he can recover to see whether there is a chance for him to be totally independent, or if he will need assistance for the rest of his life”.

Patel will need therapy for a long time, and it will be expensive. His son continues, “We are broken down. This incident hit us very hard, both financially and emotionally. We work hard for every dollar in this country”.

Chirag Patel’s wife never went back to work, and she now has not only the baby to look after but her father-in-law as well. Patel explains that it has been hard on his wife not only physically, but emotionally as well.

The governor of Alabama issued an apology but has not done anything further. The Indian government showed interest in the case, and Ambassador Ajit Kumar, who was then Consul General of India in Atlanta had visited Patel in the hospital to pay his respects and express sympathy. Since then, the Consulate has been in touch with Sureshbhai and his doctors to monitor his progress.

The family is now waiting for the US government to approve Sureshbhai Patel’s wife’s visa.

“Mom is coming from India to take care of Dad. We’re currently working through the embassy for the visa and hopefully in three to four weeks she should be here. I’d like for them both to live here with us permanently and be a cultural influence on the baby,” Patel said.

Meanwhile, reports have surfaced that Eric Parker was investigated twice by the Madison Police Department’s internal affairs division before he assaulted Sureshbhai Patel.

Robert Tuten, the attorney for Eric Parker has filed court document asking that certain discussions be barred from his upcoming federal trial on civil rights charges, reports AL.com. According to the documents, Tuten says Parker was cleared of any wrongdoing in both cases and they have no bearing on the Sureshbhai Patel case.

Mentioning the previous internal investigations in court would be “unduly prejudicial”, according to Tuten, who also wants the court to prohibit mention of any other recent cases of excessive force by police. He says these cases, which have drawn considerable media attention, have no bearing on this case and would also be “unduly prejudicial.”

Republicans are making a bargain with the 'devil': Congressman Ro Khanna