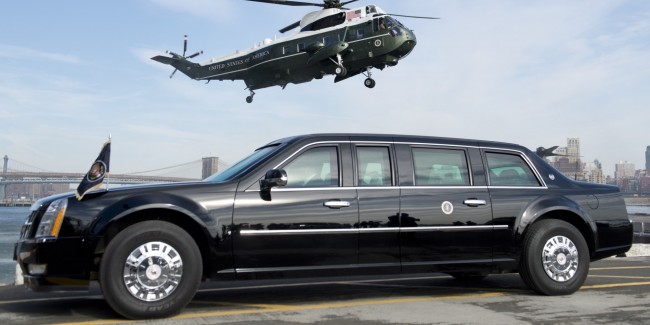 New Delhi, Jan 6 (IANS) All the top luxury hotels in Delhi have been scanned, the security is being worked out to the last minute detail, and, yes, The Beast will very much be part of the official entourage of US President Barack Obama, chief guest at this year’s Republic Day parade.

It is learnt that an advance US security team would be in India around Jan 15 to finetune the security arrangements for Obama, the world’s most powerful leader.

Though Obama visited India in 2010, the security this time would be more challenging as the US president would be seated in the open air on Rajpath for more than two hours to watch the Republic Day parade.

In view of threats by Islamist militants after Washington launched air strikes against the Islamic State in Iraq and Syria, the security scenario has gained additional importance.

A US Secret Service team would be in India next week to scour the luxury hotel where Obama and his wife Michelle would stay.

US authorities have examined the top hotels in the capital including the two Taj hotels and Maurya Sheraton but nothing has been finalized, it is learnt.

An idea of what Delhi can expect can be had from what transpired at the Marriott in Brisbane where Obama stayed for a night in November to attend the G20 Summit.

Obama’s security ordered the stripping of an entire floor of the Marriott Hotel – clearing out the furniture and investigating every nook and corner.

Security personnel removed bedding and furniture, including mirrors, from rooms. Other rooms were left with just desks and chairs as part of elaborate efforts to ensure Obama is not spied on.

The rooms were swept for bugs so that Obama can conduct confidential business and make private phone calls from within the hotel. US security agencies set up their own secure communications.

The hotel was cordoned off and only those with accreditation were let in. Hundreds of staffers accompanying Obama occupied a number of floors at the hotel.

Obama had travelled with a special portable security tent which could be set up in hotel rooms to allow him to examine classified material and hold talks.

Obama reached Brisbane airport on board Air Force One and took off in his helicopter Marine One for Victoria Park. From there, he went in a cavalcade of 30 cars to Marriott.

The chopper was accompanied by an advance team of three twin-rotor Ospreys and three other presidential helicopters.

The president’s car, a Cadillac limousine, has been nicknamed “The Beast”. It is part of the US Secret Service classified motor pool.

The Beast’s armour plating is said to be eight inches thick and its doors weigh as much as those on a Boeing 757 aircraft. It has five-inch thick bulletproof windows with at least five layers to foil attacks.

Its bus-size Goodyear tyres are Kevlar-reinforced and capable of keeping The Beast on the road for quite some distance if needed.

The interior is sealed off from the outside to reduce risks of a chemical attack. A special foam surrounds the fuel tank to insulate it in the event of an impact, according to published reports.

The Beast’s trunk is reported to contain everything from fire-fighting equipment and oxygen tanks to the president’s blood type.

The Beast has three passengers – the driver, the president’s lead Secret Service protective agent in the front passenger seat and, of course, the president himself.

Four additional seats in the back are available.

The drivers are highly-trained who can execute tight turns and other police-style evasion techniques, including turning 180 degrees in seconds.

The Beast travels in a C-17 Globemaster transport aircraft wherever the president goes.

A heavily armoured Chevrolet Suburban communications vehicle accompanies The Beast. Said to weigh 20,000 pounds, the car is said to be a guzzler of fuel.