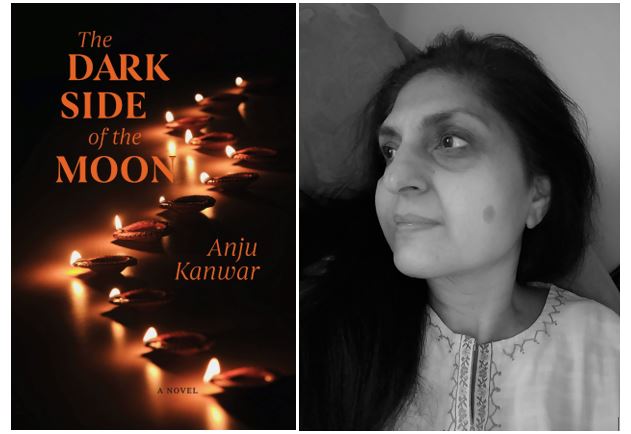 In a moment, Amrita Chaddha’s world, as she knows it, has changed. A fierce young and upcoming lecturer, Amrita is left incapacitated following her fall from a bus she boarded. An idealist, Chaddha, a victim of communal crisis, strives to makes sense of the world around her. The struggle thereafter reveals secret wounds within the family and beyond.

Dr. Anju Kanwar, in her debut novel, The Dark Side of the Moon, dives deep into the human psyche around the accident, weaving her narrative with historical events spanning across generations including the partition of India, the assassination of India’s then prime minister Indira Gandhi, even as she addresses consequential social issues of the events such as caste/race conflicts, discrimination, and inequality and holds a mirror to the combined morality of a society that exudes virtues of compassion, reason, sacrifice and vices of bigotry and violence, in equal measure.

Amardeep and Amrita are the quintessential squabbling siblings, and their parents’ Gurmehar Singh and Kundan Chaddha’s pride and joy. The sudden turn of events that rendered Amrita handicapped, even as the drivers and owners of the bus refuse any responsibility in the matter have shattered the family. But then, Gurmehar and Kundan have their own history that has shaped them to the people they are today. Through each of the characters and their stories, emerge a myriad of raw and rustic range of human emotions, be the bonds between siblings, parents, relationships between lovers, or the raging irrational ones which prompt one human being to cause pain and suffering to another.

Kanwar’s placement of everyday elements such as trees, the moon and human emotions at the core of her tale adds a refreshing touch. The guava tree across the Chaddha family home builds a partnership between the siblings unlike any other, when Amardeep uses it as a tool in his frequent battles with his sister, introducing her to the “people” who live in the tree, such the “Witchni,” the woman who lived at the other end of their street, mean to the caroling children. The moon, Kanwar writes, encourages confidence. During the day one must wear a face, hiding one’s vulnerabilities from a world that often appears harsh and unyielding. But at night, in the soft light of the moon, the guard can be let down. In Kundan’s storytelling, Kanwar places “Fear” and “Happiness” as characters, with the mother explaining, “Fear rules the dark side. It is a tiny little monster that can creep into your life unseen. A monster with two legs. Hatred and Hurt. And on these it crawls to fester and grow. But on the bright side lives Happiness. It has three legs. Love and Faith and Hope..”

Delhi, the city where the story unfolds is another character carefully carved in Kanwar’s world. The reader experiences the city through Kanwar’s lens as she zooms into the lives and lifestyles of its inhabitants, the aroma of the foods, and even the sounds, some eerie ones too. In fact, Kanwar’s usage of sounds is rather effective, especially in evoking a sense of fear each time the readers comes across it..”They were bipeds. Human beings with two legs. One and two. Left, left, left right left. Left, left, left right left…”

Kanwar’s understanding of a society’s psyche is well demonstrated throughout the novel. In simple yet powerful lines, she summarizes how quickly public memory of any event starts to fade as she places Amrita by a window, four weeks after her accident, recounting the happenings in the court as she collates the collective feeling of people towards her, “Let someone else care, it was not their concern.”

A fine political analyst, Kanwar’s Amrita succinctly summarizes how and why India has and continues to endure because “Individuals and groups harness separatist and factional forces to their own purpose. And the rest must respond to that. Just like the British did to bring India under their rule. If you look back at our history during that time, you will see that there were Hindustanis, Bengalis, Marathas, and Sikhs, but no Indians. In fact, India was divided into more than six hundred princely states even in 1858 when the British government assumed direct control. They were able to buy the services of one community against another.”

In Amrita’s reflections about nationalism, Kanwar underlines the significance of extending beyond geographical boundaries. “A geographical nationalism is limiting. It is a slave-inducing mechanism, leaving the individual out of count. In the final analysis, it is petty and dehumanizes the individual,” she writes, adding another viewpoint from Franz, Amrita’s colleague and love interest, that “nationalism is spiritual, it is all encompassing.”

Be it the endearing evocation of childhood, or presentation of complex human behavior and emotions, or an earnest assessment of nationalism, socio-political issues, or the detailed description of the way each person defines himself within these constraints, Kanwar explores her nuanced and diverse interests through her incredibly creative and eloquent writing prowess. While the story in set in certain period of history, the issues of social disturbances and its long-lasting consequences, the impact of certain events in shaping human behavior, the overall injustice and its navigation, among others, Kanwar addresses are universal and timeless.  In her Amrita, Kanwar concludes with an ode to courage, “Courage indeed does not lie under banners. It arrives unannounced. It is more often a call to necessity, to challenge. It means to live life with passion, loving deeply and truly and responsibly every single moment—no matter what it brings—so that it may be an opportunity for us to learn and grow and preserve for posterity with pride a legacy as bright or brighter than the one we ourselves inherited.”

About the Author:Anju Kanwar was born and brought up in Delhi. She trained in English studies in India and the United States, and has worked in higher education. She is the author of a book of literary criticism, The Sound of Silence, which was nominated for the Independent Scholar’s Award of the Modern Language Association. The Dark Side of the Moon is her debut novel. Author website: riseglobalinitiative.org.