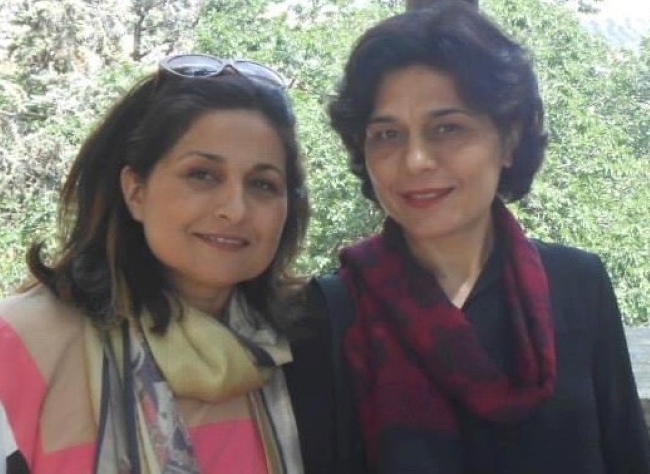 A monumental year, 2020 transformed lives, thoughts and so much more. While the unprecedented pandemic succeeded in restricting people’s physical movements, it had no control over what a creative mind could conjure to rise up to the challenge. Much like other areas, the world of literature explored new avenues to reach out its connoisseurs and patrons in untraditional ways. While zoom calls and internet most certainly existed prior to the pandemic, people put it to better use to reach out across borders from the comfort of their homes, especially when there was no hurry to physically get anywhere. Globalization has carved inroads to the literary universe, as in the case of the initiation of an interactive blog, Tillism طلسم: MAGICAL WORDS FROM AROUND THE WORLD.

Sisters Anniqua Rana, and Selma Tufail spoke to NRI Pulse about their literary journey, their views and perspectives on the digital era and its influence on literary works, and of course, the origins of their latest venture, Tillism.

Inspired by the Urdu epic Tilism-e Hoshruba published in the nineteenth century, the sisters titled their blog Tillism. Like Tilism-e Hoshruba that conjures the image of tales within tales in magical worlds linked to each other forming a hypnotic phantasma to be entered or left at any point with many opportunities to return, Tillism encourages readers to read magical words from around the world.  The blog provides the opportunity for the reader to explore the intersectionality of languages, culture, memories and then dismantle stereotypes.

“Tillism is a virtual exhibition of literature and life,” says Rana. An Urdu word of Arabic origin, Tillism, Rana elaborates, “with it its magic, science, and mysteries of the occult, beckons readers to experience personal journeys intertwining with literary ones. Ideally, they will be inspired to invite others into their lives by submitting a post.

“Literature is writing that connects us to the depths of our emotions,” agree both sisters. The sisters trace their penchant for arts and literature to their roots, a rich cultural blend of a mother of Welsh and English genes, backed by a lineage of educators from the British side of the family, and father of Pakistani origin with a flair for poetry. “Literature, languages, art, teaching, and learning have always been central to our lives,” say the sisters whose lives were further enriched by their travel and stays across various cultures – first growing up between Pakistan and England and later when they made homes in the US, United Arab Emirates, and Spain over the past three decades.

While most sisters bond over gossip, these sisters discuss books by their favorite authors.  Inspired by Szabo, P, and many Indian Writers they began to pen a literary memoir, The Simurgh Rises: Tales of Two Sisters from Pakistan.  “As we started to write it, we realized we wanted to share some of our fondest memories with friends and family.  They loved those recollections. Then we added a new element to the vignettes: we created short videos, which we posted on Facebook and these were also greatly appreciated.”  With the new year, we decided to take our writing a step further and connect with a larger audience with Tillism.

The blog opened to a fantastic response, with 3000 views from over fifteen countries within the first week, with nine posts. They have requests from poets and writers in the Bay Area and beyond who are interested in posting their work.

“The blog is a culmination of the lives we have lived thus far and we plan to take it further with the help of our subscribers,” said Rana and Tufail. The sisters ‘current topics of interest include Krishna Sobti’s Punjab, Min Jin Lee’s Japan, Akka Mahadevi’s mystic poetry, Ismat Chughtai’s India, and Mohsin Hamid’s Pakistan. Fully aware that a vast world of literature awaits to be uncovered, the sisters invite a global audience to indulge in their blog as both audience and contributors.

What is the criteria for contributions to be accepted on Tillism? Anyone can contribute if they have a memory or inspiration related to some literary work, says Tufail. They invite posts of 500-1000 words, with voice recordings, videos or images. They then link the piece to sites that will further engage their readers. One key component for the submission is to include at least one word or more of a language other than English and to provide enough context for the reader to understand.

Along with a historic vice president taking her oath, the Presidential inauguration was also rendered memorable by Amanda Gorman, who brought literature to the forefront. That her inspirational words impacted people was evident with her books topping Amazon and Barnes & Noble bestseller lists on Thursday, less than a day after she delivered her poem.

“Even before the inauguration, BLM had already made a strong impact on the publishing world. BIPOC readers and others want to read a variety of books that have not been made available to them because of the practices of publishers. Writers like Maya Lang Shanbag, and Ayad Akhtar made bestseller lists in this summer of COVID-19.  We’re optimistic that readers will demand more from publishers, both online and in introducing BIPOC writers,” observed Rana. She goes further, adding, “The question now is, do BIPOC writers want to support publishing houses that have been dismissive of them in the past.”

Be it a lethargic buffalo or the ancient scriptures, the sisters have learnt to transform anything that tugs at their hearts into art and literature. Observing people’s renewed interest in reading and reflecting during the pandemic, the sisters are optimistic about the interest a blog such as Tillism could potentially generate. For Tillism’s sake and for the sake of literature, we sure hope the trend continues to reign.

Anniqua, author of Wild Boar in the Cane Field is shortlisted for Pakistan’s UBL Literary Award 2020 after being published by Folio Books and She Writes Press in the States. She holds a doctorate in International Education and has taught at San Mateo Community Colleges, University of San Francisco, Lahore University of Management Sciences, and Stanford University.

Selma, an artist who lives in Spain set up of the very first Department of Art & Design at Zayed University in the United Arab Emirates. In that capacity, she developed an academic relationship with the Complutense University in Madrid, Spain, and was awarded the coveted honor of the Outstanding Faculty Member of the Year award at Zayed University (2003-2004). She is the recipient of the highest civilian award of Spain, the Spanish Order of the Civil Merit granted by His Majesty King Juan Carlos I of Spain. She is the author of Con Yanci: When Chickens Fly and Other Tales, a children’s book.