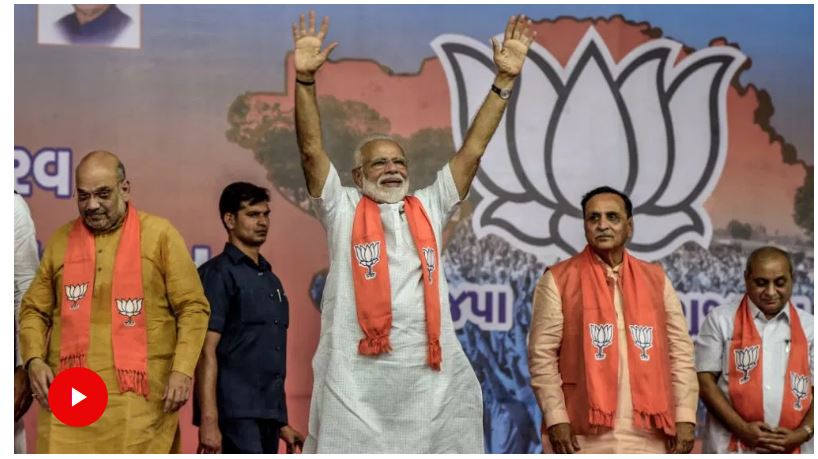 New York, May 29 (IANS) Time magazine, which published a cover story before the Indian election calling Prime Minister Narendra Modi the “Divider in Chief”, has in a quick about-face run report with a headline, “Modi Has United India Like No Prime Minister in Decades”.

The article with that headline published on its website on Tuesday, asked “How has this supposedly divisive figure not only managed to keep power, but increase his levels of support?” and answered: “A key factor is that Modi has managed to transcend India’s greatest fault line: the class divide”.

The writer, Manoj Ladwa, credited Modi’s emergence as a unifier to his origins in a backward caste — a factor missed or deliberately omitted by Western media obsessed with what they call upper caste domination.

“Narendra Modi was born into one of India’s most disadvantaged social groups,” he explained. “In reaching the very top, he personifies the aspirational working classes and can self-identify with his country’s poorest citizens in a way that the Nehru-Gandhi political dynasty, who have led India for most of the 72 years since independence, simply cannot.”

“Yet despite the strong and often unfair criticisms levelled at Modi’s policies both throughout his first term and this marathon election, no Prime Minister has united the Indian electorate as much in close to five decades,” he said referring to Indira Gandhi’s massive 1971 victory.

The pre-election cover story by Aatish Taseer was turned into campaign fodder in India and acclaimed by Modi’s critics as an indictment of him as a “divider” by a global media powerhouse. In reality, Time is an ailing magazine that has changed hands twice in a year — bought in March last year by Meredith, the publisher of magazines like Better Homes and Gardens, and All Recipes, it was sold in again in September to tech entrepreneur Marc Benioff, the founder of Salesforce, and his wife.

In fact Time’s flagship US edition did not bother run the Modi story as cover, and instead gave the spot to Elizabeth Warren, a candidate for the Democratic Party’s presidential nomination for president.

The Britain-born son of Indian journalist Tavleen Singh and the late Salmaan Taseer, the governor of Pakistan’s Punjab, Taseer wrote in the cover story, “Not only has Modi’s economic miracle failed to materialise, he has also helped create an atmosphere of poisonous religious nationalism in India.”

However, in the latest story, Ladwa writes: “Through socially progressive policies, he has brought many Indians, both Hindus and religious minorities, out of poverty at a faster rate than in any previous generation.”

In Time’s other post-election analysis, Alyssa Ayres, who was the deputy assistant secretary of state in former President Barack Obama’s administration, hedged her bets on the economic course of his second term.

She wrote: “A bold economic reform agenda may be what comes next. But equally possible, based on the recent track record, might be stepped-up development projects in lieu of tough reforms, and a more nationalist approach to economic matters.”

“A mandate for improved quality of life might not imply a mandate for further opening markets. It’s a distinction that matters, not least because expectations internationally might assume the latter,” she added.

Ayres, now a senior fellow at the Council on Foreign Relations, saw a bumpy road ahead for India-US economic relations with President Donald Trump’s focus on trade deficits.

“The US-India economic dialogue, for decades fraught at the best of times, is in a tough place,” she said, adding “The longstanding list of trade complaints — many of them US complaints about India’s market — contains a mind-numbing array of issues”.

I guess Time magazine is looking for Indian subscribers. I get unlimited emails that they want me to come back as a subscriber.