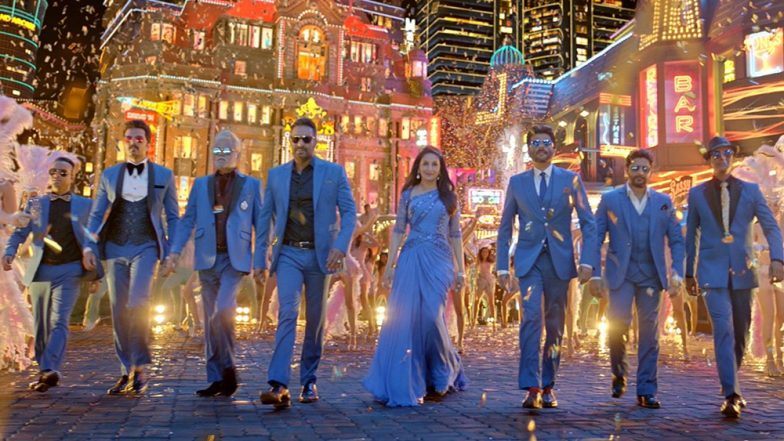 This is the third film of the series and like its predecessors, this one too is an action-comedy with its heart in the right place, but its story isn’t.

The plot is a cheerfully crappy schlock: The tale is flat, generic cat-and-mouse chase between eight characters to collect a booty of rupees fifty crore that’s been snitched from the Commissioner of Police (Boman Irani).

With a cardboard thin story line, the script is stitched with buddy scenes and is packed with action drama and comedy. It takes you on a roller-coaster ride of desperately anti-climax moments with laughs in every scene punched with low-brow dialogues that holds your interest more than it should have, given how sloppy it is.

The narrative begins with informing us that this is “all about the money”, and follows up with a song that is mounted like a Broadway musical introducing us to the eight main characters.

They are; Radhe (Ajay Devgn) whose aim is life is, “Bada aadmi ban na hai,” and he does it by stealing, his lackey is Johnny (Sanjay Mishra). Deshbandhu Roy aka Lallan (Riteish Deshmukh) is a small time con-man and trickster and his flunky is Pintu (Pitobash Tripathy). Adi (Arshad Warsi) is accompanied by his dim-witted brother Manav (Jaaved Jaaferi) and a sparring couple, the Guju Avinash (Anil Kapoor) and his Maharashtrian wife Bindu (Madhuri Dixit-Nene).

On the performance front, every actor is effortless and natural. Each pair shares a brilliant chemistry between themselves and are legitimately funny as they fit right onto the bromantic comedy bandwagon. The only odd couple is the Bindu-Avinash pair with Madhuri appearing a bit jaded and forced.

The soundtrack is laced with a few remixes of the 1980s and 1990s blockbusters. Prominent among them is the number “Mungda”, which is beautifully choreographed and excellently picturised on Sonakshi Sinha who does a guest appearance in this number.

On the production front, the film is well mounted with ace production values except that the sets appear to be a tad bit antiseptic and synthetic and the CGI of poor quality.

The action sequences, despite being predictable, are thrilling and exciting and a few of them actually get you to the edge of your seat. The first half is fast paced and races through. The second half drags a bit trying to play on the emotional chord, especially in the zoo scene. And the climax is actually flat.

Overall, “Total Dhamaal” is a total time-pass film sans any intelligence. You could term it as an acceptable good grade from a below average student.