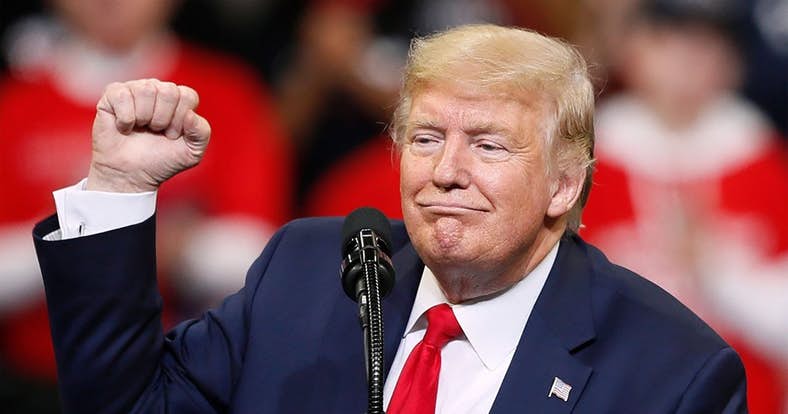 American citizens, during the past four years, have heard nothing but Russia, Muller and Ukraine in the media.  Some of you who have not cancelled your cable TV subscription like me, may have heard it at least once per minute your TV set was on, or read about it as many times as you opened the internet or newspapers.

Such is the importance that the media has given to these topics. Events like mass shootings, hurricanes, and even winning the war against terrorism were relegated to news tickers or miniscule coverage. Whether this improved the TRP of the TV channels is a matter for the analysts, but I’m sure there are some who stopped their cable TV subscriptions, as it had become so monotonous and unbearable.

People may have suffered boredom over Trump news. However, President Trump, who loves to be in the limelight, appeared to be thoroughly enjoying it.

Whenever Trump felt like he is not being mentioned in the news, he used social media and his morning twitter pills to fuel a discussion, and the media unfailingly took the bait and brought the President back in the news. The debate was in the name of protecting the Constitution and the sovereignty of USA. How much it was for the country and how much it was pure party politics, that the people of America will decide in the next available opportunity they have.

Independence of the elections is important to the sovereignty of every nation. Those of us who came from developing countries are fully aware of the impact of foreign interference in the elections in their respective countries. In some countries, elected governments hold office during the pleasure of some de-facto foreign power. Regime changes because of the change in equation with the foreign power is not uncommon.

There are a very few nations which can resist foreign influence. The influence can happen in any form or manifestation, be it through military aid, trade deals or funding through NGOs (Non-Governmental Organizations) or assurance to stay put a corrupt dynasty in power. However, foreign interference in the elections in a developed nation like USA wasn’t explicit or ever imagined to this extent prior to the 2016 elections.

This also would have gone unnoticed had the then candidate Trump not allegedly invoked the name of a foreign country in one of his several faulted rhetoric. Tours of Presidential candidates to foreign countries to sell their agenda is done by both Democrats and Republicans. Similar tours are undertaken by other world leaders also before elections. However, these were always done with a diplomatic sugar coating. Trump had a difficulty here too as diplomacy itself was foreign to the language he used. Trump treated politics like he ran a corporation, and his communication style remained the same.

Trump was not only a non-politician but also unpolished in language, with no control on his communication style, vocabulary and the timings of his utterances.  It won’t be a surprise if many in the Republican party privately wished victory to the opposition.

Trump knew that he was not the choice of the Republican establishment. He ran a campaign in his own style, and he did not listen to the counsel of the experienced Republican politicians. Why would he; Trump never considered them as his well well-wishers. This made a good number of the veteran Republican politicians feel that they are being rendered irrelevant in the party and at the national stage. Some of them became open critics of the party Presidential candidate more than the opposition Democratic Party. All these led Trump to fight the 2016 election largely on his personal strength, and by communicating with voters directly. To his own surprise, Donald Trump gained victory and became the President of USA.

Trump never forgave the Republicans who opposed him and used every opportunity to neutralize their impact. The gulf was so wide that Trump could not build a strong team to run the administration. The experienced and capable either did not join Trump team, or Trump did not take onboard those who were anxious to share the spoils of the power. The increasing influence of the family in the administration aggravated the situation. A few who were braved enough to be part of the Trump administration, including his onetime close confidants, found it increasingly difficult to function under him. Some of them relinquished their position voluntarily and some were unceremoniously show the exit doors.

The opposition, Democrats, faced the worst shock ever in the defeat of Hilary Clinton, which they could never reconcile with. The delay in accepting defeat and giving the concession speech and the argument on popular vote vs. electoral vote etc. is fresh in the memory of Americans.

Democrats and the media supporting them unleashed a campaign questioning the legitimacy of President Trump occupying the White House. Some of those who subscribed to the illegitimacy theory reportedly went to the extent of predicting that the President will not complete his term because he will be impeached. Such claims are reported to be made even when the President was still to be installed and inaugurated.

Whether made consciously or unconsciously, this prediction of impeachment was the main defense by the President’s counsels used throughout the impeachment trial which I call here as the “pre-existing mindset” of Democrats. The President’s counsel argued that the Impeachment trial is therefore nothing to do with the Ukraine aid and the Biden enquiry but a contemplation that the opposition staged well before the President took office and is thus blatantly partisan. Democrats thus fell victim to an alleged “pre-existing impeachment mindset” which did not get covered in the tests of Impeachment rules. When President Trump announced that pre-existing conditions will be covered during his State of the Union address, Democrats may have secretly wished if it had been there earlier and extended to impeachment as well.

Democrats hoped that there’d be Republican Presidential hopefuls who would rebel against the President and vote with them.  They miscalculated the influence of Trump amongst the Republican voters and the continued lack of leadership in Republican party outside the President.

Over the years, Donald Trump has been successful in gaining control over the Republican establishment. This, plus Trump’s direct connection with his voter constituency seem to have convinced Republican Congressmen that they were more secure to face the 2020 polls with the incumbent President.

In the whole impeachment saga, Democrats lost a golden opportunity to defeat Trump in the polls for the un-Presidential person he is and his records on the 2016 poll promises. Given the current stack of Democratic Presidential candidates and the latest debate in New Hampshire recently, Democrats appear to have served the 2020 Presidential victory to Donald Trump on a platter.

US concessions to India is because of fondness for PM Modi, says Trump