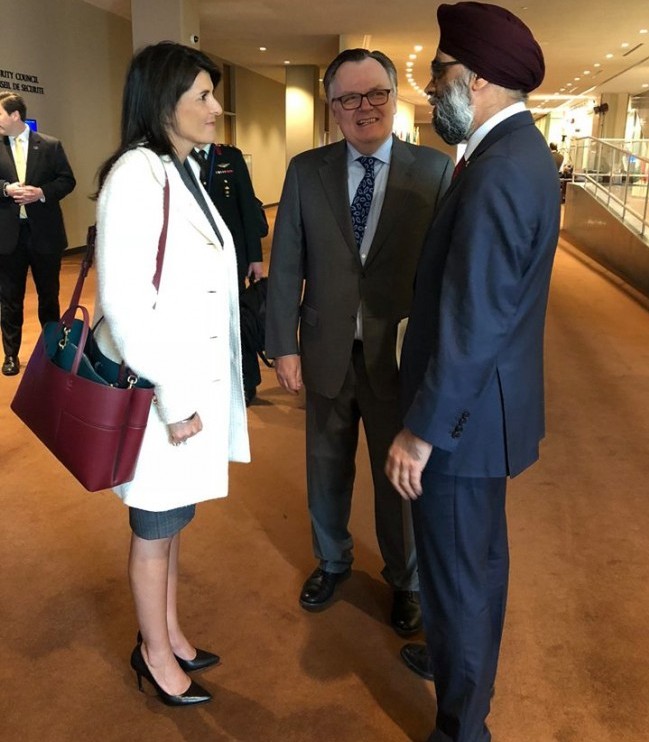 United Nations, March 29 (IANS) In a sign of the Indian diaspora’s growing influence, two cabinet-level officials of Indian-descent represented the biggest superpower, the US, and its neighbour, Canada, at the UN Security Council’s ministerial-level meeting on peacekeeping on Wednesday.

And they are both Sikhs — US Permanent Representative Nikki Haley, a member of President Donald Trump’s cabinet, and Canadian Defence Minister Harjit Singh Sajjan.

They were among the ten ministers and a deputy minister from Asia, Africa, Europe and the Americas at the meeting presided over by Dutch Prime Minister Mark Rutte.

But there was no minister from India, which was represented by Tanmaya Lal, the Deputy Permanent Representative.

The changing demographics of Europe was on display, too.

Britain was represented by Tariq Ahmad, the Minister of State for the Commonwealth and the UN, and Sweden by Ibrahim Baylan, the Policy Coordination Minister.

Ahmad is an Ahmadiyya Muslim of Pakistani origin, while Baylan is an Assyrian born in Turkey.

Nikki, or Nimrata Nikki Randhawa, is the daughter of Ajit Singh and Raj Kaur Randhawa, who immigrated from Punjab’s Amritsar district. She was born in South Carolina state and was elected its Governor.

She came to the meeting with the Trump administration’s policy of cutting back on international contributions.

She said the US will not pay more than 25 percent of the peacekeeping budget and there should be a more equitable sharing of the burden.

Peacekeeping was a shared responsibility of all the nations and “One country should not shoulder more than one quarter of the UN peacekeeping budget,” she said.

Washington now foots about 28.5 percent of the $7.3 billion peacekeeping budget.

Haley said that peacekeeping missions need to support political solutions and the mandates set by the Council “must be realistic and achievable”.

“We need to be willing to change mandates when things aren’t working,” she added.

Sajjan, who was born in Punjab’s Hoshiarpur District and immigrated to Canada when he was five years old, spoke on behalf of the Group of Friends of Women, Peace and Security and held more women should be deployed in peacekeeping operations.

Creative thinking was required to meet this challenge and the UN department dealing with peacekeeping should devise a gender strategy.