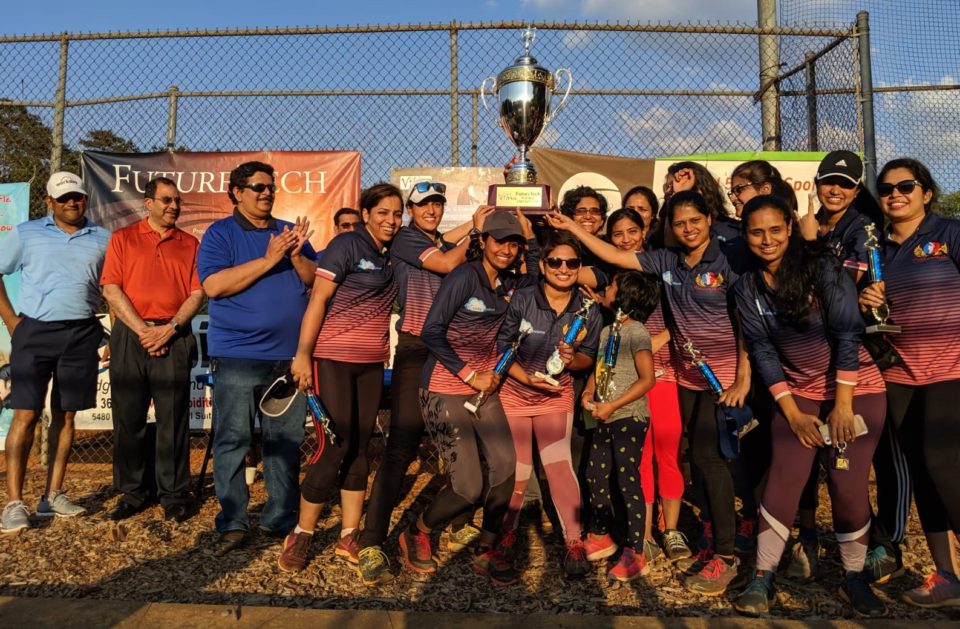 Twenty-one years ago, a handful of energetic and visionary Vibha volunteers came up with a unique idea to organize a cricket tournament in Atlanta to raise money for the education of underprivileged kids in India. They knew it was a huge undertaking, but their mission and drive didn’t faze their vision.  So, they organized the first cricket tournament with 16 teams.

Year after year, the Vibha cricket tournament started gaining popularity among cricket aficionados.  The tournament became so popular that four years ago, they added women teams in the tournament.  So, this month Vibha successfully held its tournament with 42 teams and more than 500 players for three consecutive Saturdays in Roswell and Waller Park.

In the Men’s game, the winner was Cozy Bazookas, runner up was Allied Informatics Master Blasters.  Barun Singh from Atlanta Maniacs won the Man of the Tournament award, Best Batsman went to Raja Vijay from Allied Informatics Master Blasters, and Best Bowler to Barun Singh.  On the other hand, Cozy Bazookkas Supernova won the winner trophy in the Women’s game. The runner up team was Crickootam; Women of the Tournament and Best Bowler went to Anila Shaikh from Crickootam and Best Batswoman award went to Kaveta Deepak from Crickootam.

Vibha is a non-profit, volunteer-driven organization which raises money for underprivileged children in India.  Since 1991, Vibha has raised around $17 million,  supported more than 300+ projects in India and 10 projects in the U.S. including Children’s Healthcare of Atlanta. This organization has reached out and has impacted over 2 million underprivileged children.  At this Cricket Tournament Vibha has raised almost $100,000.

The title sponsor, FutureTech, an Atlanta based consulting Information technology company, has been an integral part for sponsoring the cause.  The company has been part of Vibha since its inception, and it has raised more than $200,000. During the closing ceremony the CEO and Chairman of the company, Sravan Vellanki, thanked Vibha volunteers and encouraged people to contribute to the organization.  He further said, “ …Vibha has a cause, they have a purpose and they are meeting and maintaining the purpose successfully for a long time…” Apart from FutureTech, the event was also sponsored by RapidIT, SplashBI, Serenity, GVR Reality, and Datum.  This year the event added three new sponsors: Moxy Financial, Farmers Insurance (Milan Merchant), and InCorpTaxACT. Besides the sponsors and volunteers, each team raised money for the organization through their pledge pages.  The men’s team Coolguys raised the highest amount of money ($11,000) in men’s category and the Women’s team Crickootam raised the most ($2,000) in the women’s category. Moreover, this year, Vibha took a big initiative to “go green” and has collaborated with a non-profit organization, Green Cell Atlanta, to reduce plastic use.

Since Vibha is a volunteer-driven organization, this tournament was led by three dedicated and committed volunteers: Raj Vuchatu, Sameer Pirani and Sirisha Lingareddy. They worked tirelessly to make the event a huge success. During the closing ceremony, Raj thanked all the volunteers and said, “sometimes the volunteering work seems enormous …but when we think of the impact these funds we raise will have on underprivileged kids, it just feels so good…”

By holding this month’s tournament, the journey and vision of Vibha continues and keeps growing in scope and its impact.  The next upcoming event for Vibha is the College Readiness Program for middle school and high school students and parents in August 2019 and  DreamMile on September 22, 2019.  Through the help of our amazing sponsors and tireless efforts of volunteers, the next events will be as impactful as this tournament was.

The slogan of Vibha Cricket sums it up greatly:  “Be the champion for a cause”. Surely, Vibha has been the champion to raise money for the welfare of kids who don’t have a voice.