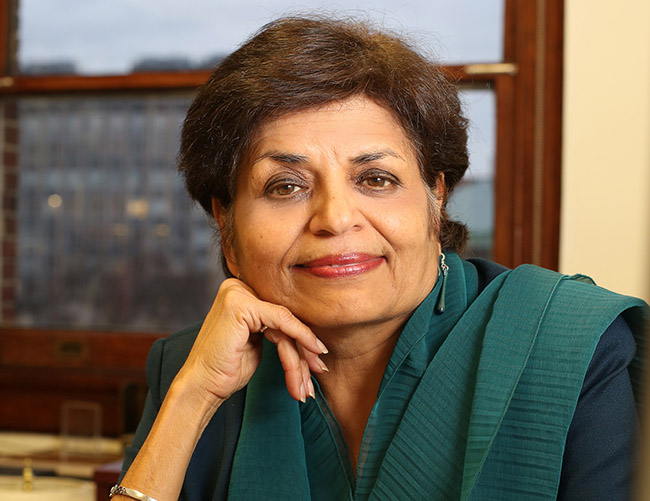 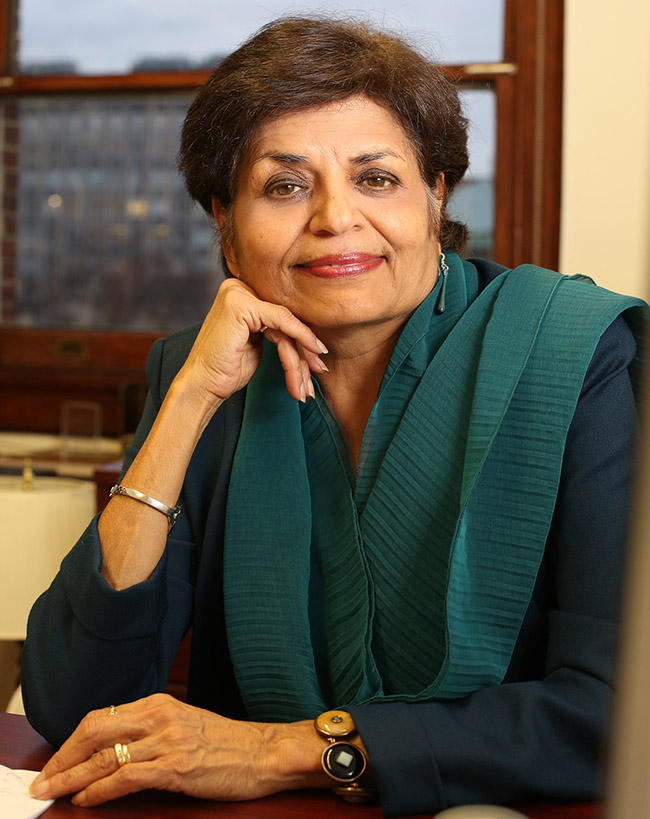 Vishakha Desai is currently special advisor for Global Affairs to Columbia University President Lee C. Bollinger. She is also a professor of Practice at the School of International and Public Affairs. She served as the President and CEO of the New York based Asia Society from 2004 to 2012. She is the recipient of several awards. Her background in Art and Art History enabled her to successfully mediate several cross cultural projects. A senior advisor in the Guggenheim Foundation, she was also appointed member of the National Museum and Library Services Board by US President Barack Obama in 2013. She spoke to SUPRIYA D.G. about her passion for connecting- across cultures and to her roots, and why it continues to be important in a world that seems to be violently asserting its differences.

Since she was an exchange student at the age of 16, Vishakha Desai’s life has been about global and cross cultural exchange. “I was bitten by the bug and wanted to learn about different cultures,” she says.

Desai realized early on that without trying to understand another culture, there could be misunderstandings. Her move to the United States at the height of the Vietnam war only emphasized this need around her. Her long stint with the Asia Society, both as its President and CEO, saw her managing funds, restructuring and directing the organisation’s activities to its current outreach and success.

Four decades later, her job at Columbia University’s Global Affairs Department, was about understanding how the world is connected globally. Desai makes it a point to differentiate between global and international. If Columbia University’s diversity of faculty and students, and its varying fields of study make it international, then the connectivity that it has sought to foster across countries and disciplines makes it global.

“The condition of globality is the non-specificity of knowledge. We have to bring different departments together and try to focus on working together.” Desai admits that it is complicated at times when there are differences in cultures and thinking, but that the philosophy that drives such an interactive process is to have “multiple points of view in today’s world because multi-lateral co-operation is needed to solve issues such as climate change, food security and so on”.

Desai is however confident that interaction does not necessarily mean power relationships. “Difference does not mean making a parody of what you are not. The specific knowledge of a place is necessary. We need to know where people are coming from.It might be tough but it is a work in progress. There is a lot of reflective self awareness” she explains.

The university’s eight global centers with its directors and scholars work actively to support the projects. Desai speaks for example, about a project on promoting arts and culture in global cities. The process required inquiring how arts matter in global cities, in knowing the conditions of the place and finding shared traits across cultures and then formulating policies and activities.

At a personal level, Desai’s strong convictions about “disrupting the singular perspectives” is a lesson learnt from her parents who were both involved in India’s struggle for Independence. “My parents were Gandhite principled people who exhorted me not to make judgments but to be open. But it’s hard because this cultural stuff is so deep.” Desai feels compelled to add that despite the strong influence of her roots, and the acceptance of other cultures among the people in India, the deep rooted conventions sometimes make it hard for people to escape being enslaved in retrogressive mindsets.

Surely such attitudes are somewhat universal? The spate with which incidents of racial violence in the US has been reported by the media in the recent past shows the need to look at dialogue within these countries themselves, since they never tire of pointing how freedom of speech is grossly violated elsewhere. Desai wants to quote President Bollinger to say that freedom of speech in the US has also been an evolving concept. “The aspiration should be to create a bigger space rather than a constricted one. Social harmony must not come at the cost of constraining certain views instead of openness.”

For Desai, “the multi-racial, multi-religion and multi-perspective society” that America stands for has enabled it to come a longer way than other western nations. “Even with the election of President Obama, the US is not a post racial society. Old fashioned attitudes are still pervasive. We can’t shove things under the carpet. But we have to accept that this is not perfect,” she concurs. Desai’s reiteration of her faith in the timeless values of humanity also come in the face of evidences and allegations of long standing discrimination in the academia as well as other institutions.

Yet again, Desai bemoans the lack of leadership to initiate social change in India. She believes that social reformation took a back seat in the political struggle for independence so that some things today seem to have gone backwards. The only option for Desai is to exist at multiple levels. Desai believes that ideas about culture and history have been hijacked by the right in India so that any discussion about heritage tends to sound conservative. For her, the need to be grounded in one’s heritage, the need to know where one is coming from, will enable an individual to deal with the continuous and oncoming onslaught of new experiences.

“We live in a post industrial society and creative problem solving is a must if one is to succeed. When you live in America as an Indian immigrant, you learn about American history, but you also learn Indian history.” A number of students of Asian origin take South Asian History courses at college showing a desire to connect to their roots perhaps.

Creativity for Desai also means giving importance to the study of Arts for its own sake. She asks “Why must we think about creativity only in teaching Math and Science?”

Desai who is embarking on writing a book about the making of modern India with stories about her parents as well as her life reaches out to the ancient Indian philosophy of yoga. She says “This mind-body connection can be traced back to the 8th century BC and is a profound idea amidst the Cartesian dualism that permeated much of western philosophical thought for a long time. If India wants to be a global power, economic development is not a sufficient condition nor is the political system which is not unique to us. We must draw on our civilization’s strength.”

As the only woman on the board of independent directors at Mahindra & Mahindra Limited, woman rising is probably an apt description of the life of Vishakha Desai.

Atlanta Asian-American college fair to be held in September

The Darkest Night: ‘I know what it means to escape death by a whisker’