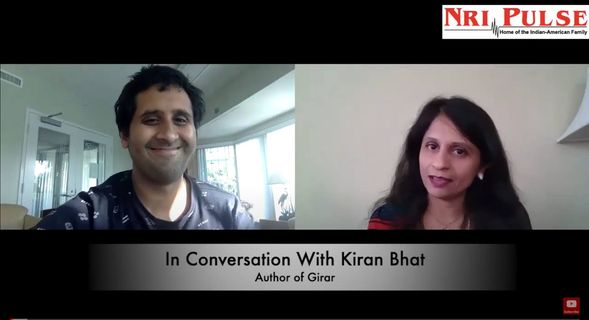 “The true alchemists do not change lead into gold; they change the world into words,” quoted William H. Gass. In Girar (Spanish for to turn), author Kiran Bhat who has visited 135 countries, amalgamates his experiences and imagination creating a streaming narrative that spans across 365 different places of the world by reimagining and resituating an archetypal Mother, Father and Son into a different cultural context in each installment.

Installment, you ask? Yes! Welcome to Girar.world, a pioneer project with a unique launch in the digital space. And not just the launch, Girar is literally turning around the way we think about publishing and storytelling. Girar’s story installments are told in real time, published on the time and date that the story is supposed to unfold. Not able to fully absorb the concept? Bhat elaborates on his distinctive narrative, the launch, story in installments and much more in his interview with NRI Pulse.

“I wanted to think about how I could capture the entire planet into one narrative, to create a space where different people who come to create our ideas of mentality or culture could come together in the form of literature, “said Bhat about the way his travels translate into writing, in general.

But for Girar, Bhat said he found his inspiration in the form of a “Darshana,” a sudden moment of enlightenment, in Segovia, Spain, within the confines of a “cathedral/mosque/synagogue.” “You suddenly feel this, kind of space where the divine is speaking to you. If I can envision these three very different religions coming together and coexistence, What about all the cultures of the world? So, Bhat unified the world in the space he was most passionate about – his literature. And Girar was conceived.

On April 13th, at 5 am, India Standard Time, the first story of Girar is streamed online. The significance of this date (Yugadi, for Hindus), along with the onset of the pandemic and its side effects (which actually happened in real time) are encapsulated in the story streamed to all Girar subscribers on that date!

The first six stories of Book One are sent for free when the user signs up on Girar.world, explains Bhat. Thereafter, a monthly charge of a little over a dollar ($1.3) or Rs. 100 per month applies to access the rest. Book One runs consecutively, day after day, from April 13th to May 12th. “Each story takes place in an entirely different country, and culture, and so I’m excited to explore how changing the setting of a piece of story can enhance, augment, or redirect the tensions of its greater tale,” said Bhat. It is your Netflix of stories, so to speak.

Girar, Book One: Chaitra 2078, Who We Are charts Mother and Father’s reaction to Son’s sudden return home as a result of the COVID pandemic.

Rooting his novel on the most primitive of relations, that of a parent and child, Bhat said he addressed challenges of the family when a child is different from the norm or when   children don’t necessarily turn out as parents aspired them to be.

“The goal is to explore how years of estrangement cause conflict even when there are good intentions, and how small disagreements in lifestyle choices cause greater conflict to emerge,” notes Bhat. He explains further that issues and people such as these can be found all over the world. So while Bhat’s characters – mother, father and son and the story of them finally finding a way to make peace and find a space of acceptance for each other remain fixed, he played with the local cultures, concepts, festivals, and ideas that would only exist in those places.

“Ultimately the goal is to show how despite tradition, despite difference of opinion people and families can eventually come to love each other, and that love will eventually allow us to transcend those differences.”

While Book One ends on May 12, 202, the stories continue to stream from April 13 to the end of 2029. Girar documents the way humans change, evolve, adapt and become new people over the course of a decade. The changes are minute, observes Bhat, over a year. But then, Bhat plays it out over a decade, and in slow burn.

Bhat has not just visited but also lived in 18 different countries. Does he find a common thread that binds us as human beings and has he used it in Girar? “We have certain proclivities that then we all kind of rise towards. We feel a sense of resonance, empathy, a sense of something that’s similar to me even though this person is so different in all the superficial ways, “noted Bhat. And he said, he worked with this idea that there can be that resonance in each of these different cultures despite them being different, despite even the versions of mother and father son being so different from each other.

“If a part of the story is set in a country like Morocco where people speak Arabic, rather than going from left to right, it goes from right to left, and playing with like the quotations the punctuation marks and to make it feel real,” said Bhat, who transports himself completely to his story and setting, even thinking in that local language, because Bhat is a polyglot who speaks 12 different languages!

“Buddha meditated, not because he wanted people to observe him but to transcend himself,” ruminates Bhat, when asked if he thinks people are globalized in their thoughts enough to be open to a venture such as his.

How did the pandemic affect his writing and publishing process? Given that his stories unfold in real time, Bhat said it actually helped his narrative of a son returning home due and being grounded due to COVID, added more credibility for his staying back. As for writing, Bhat said he continued his spree of knocking out 3000 words a day. Bhat is not sure if the trend of reading books online will continue given that people might be fed up with reading off a screen and may actually want to hold a book.

“I don’t think anyone can give you the spark to write. I think you would already be going in that direction when you meet people who help you move further on that path. So, I would like to help those people, set on that path,” said Bhat about inspiring budding writers.

Bhat’s Girar is an earnest exploration of parent-child relationship across the globe, launched in the most innovative of ways. To Turn around the mindset of an entire generation requires users to share and believe the vision of its creator. Just the way you stream your audio and videos, Bhat is trying to create a digital space for novels to be streamed.  “The fact that I want to do it becomes its own form meditation. I have to do it and just hope for the best and hope that it does something. I can’t control the outcomes I just can only control my actions,” ponders Bhat. Whether or not Girar will turn around the way we think about reading, characters and the concept of one world, remains to be seen. But for now, we can take heart in the fact that young authors such as Bhat are making a solemn attempt in that direction. Bravo!